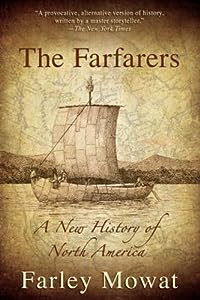 The farfarers : a new history of North America

After years of research, sparked by his discovery of roofless ruins in Hudson Bay, Farley Mowat presents a speculative history of the first Europeans in North America, and a challenge to the presently held notion that the Vikings were the first to inhabit northern Canada. During the sixties, on a windblown shore off Hudson Bay, Farley Mowat observed ruins that could not have been left by the Inuit, the only known first inhabitants of the region. Carbon dating placed these ruins hundreds of years before the Vikings landed in Newfoundland, but conventional, accepted historical theory could offer no explanation for them. Mowat's search led him to Scotland and the Northern Isles where he discovered ruins that resembled those he had seen on the other side of the Atlantic. He painstakingly researched early historical accounts from Roman and pre-Roman times for answers, and was able to reconstruct the story of a forgotten people. Fictional accounts of the Albans in their skin-covered boats, venturing ever farther from known shores, in search of the massive walrus herds that were their livelihood, and a place of safety from the warlike Celts and Romans, are woven skilfully into the re-construction. Provocative and controversial, The Farfarers is a beautifully wrought literary adventure that is sure to excite lively debate. It is a book that challenges perceptions and forces the reader to re-think the origins of the North American continent.(1998)… (more)

LibraryThing member Gaga112
Based on years of travel and writing about the Arctic north, Farley Mowat has come up with a plausible alternative history of the discovery and settlement of north eastern Canada. His arguments are well stated and illustrated, and he takes care to show the reader which statements are supposition on his part. I've always enjoyed Mowat's writings, and this book was no exception.… (more)
1 more
LibraryThing member jjmcgaffey
Interesting, with some new angles on things I knew about (like the Picts). But not really enjoyable to read - too dense and heavy, and the "story" interludes didn't help much. It took a long time to read, and I read a bunch of other books while I slogged through this one - the only way I could get through it. Oddly, as it got closer to the present day the evidence for his theory seemed to get thinner - they _could_ have known about Newfoundland so "I conclude that" they did. The archaeological digs, few as they were, were very interesting; if he'd managed to write the story from that angle, I'd probably have believed it more. But so many of the sites are not yet studied, or studied and declared Dorset or Inuit or whoever - Mowat tries to present this as stick-in-the-muds trying to ignore new evidence, but what he has is so thin the presentation doesn't really take (for me, anyway). Heyerdahl at least had an event - the reed ship voyage - to hang his theories on, which made Kon-Tiki an interesting read. Mowat has a few interesting small trips, but they're scattered both in time and through the book, and don't make a connected narrative. Interesting theories but not an interesting book.… (more)
Fewer

Westviking; the ancient Norse in Greenland and North America. by Farley. Mowat
Snow Walker
Lost world : rewriting prehistory : how new science is tracing America's Ice Age mariners by Tom Koppel
Bones, boats & bison : archeology and the first colonization of western North America by E. James Dixon
The Siberians. by Farley. Mowat
12 more
Bones : discovering the first Americans by Elaine Dewar
The far traveler : voyages of a Viking woman by Nancy Marie Brown
The Vikings and America by Erik Wahlgren
Saga America by Barry Fell
The Norse discovery of America Vol. 2 by Helge Ingstad
The island of seven cities : where the Chinese settled when they discovered America by Paul Chiasson
The Day Before America by William H. MacLeish
Megaliths and their mysteries : a guide to the standing stones of Europe by Alastair Service
The Lost Civilizations of the Stone Age by Richard Rudgley
The Vikings by Howard La Fay
Early man and the ocean by Thor Heyerdahl
The Vikings by Neil Oliver
Fewer