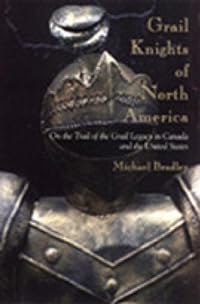 Grail knights of North America : on the trail of the grail legacy in Canada and the United States

A decade ago, Michael Bradley published the Canadian bestseller, Holy Grail Across the Atlantic (Hounslow Press, 1988), presenting the astounding evidence that a European settlement in Canada had been established in Nova Scotia ninety-four years before Columbus and ninety-nine years before John Cabot. Incredibly, mediaeval documents and maps showed that this settlement had been founded by refugee Knights Templar from Scotland - knights who had been created for the sole purpose of guarding the Holy Grail. Bradley presented evidence that these Grail-believing religious refugees and their knightly protectors had been instrumental in discovering, settling, and influencing the development of New France and, later, the fledgling American Republic. The book was automatically ridiculed by conventional North American historians, while at the same time serving as the model for European works (e.g. The Sword and the Grail by Britain's Andrew Sinclair). Michael Bradley's investigation stimulated some serious professional and academic researchers to join his quest to find further evidence of the Knights Templar in Canada and the United States. Now, in 1998, comes the publication of the long-awaited sequel to Holy Grail Across the Atlantic - Grail Knights of North America. Realizing from mediaeval documents that the initial Nova Scotia refuge of AD 1398 must have harboured many Grail believers, and that the secret colony must have expanded, Bradley began to trace evidence of Grail Knights from Nova Scotia, through New Brunswick to the St. Lawrence River, and on to the Great Lakes as far as Niagara, New York State, and central Pennsylvania. Evidence of their presence has been uncovered on both the Canadian and American sides of this great waterway. Bradley poses compelling questions about his discoveries, and offers plausible and provocative answers as we travel with him and his companions (both academic and amateur) along the trail of the Grail Knights of North America.… (more)

Holy Grail across the Atlantic : the secret history of Canadian discovery and exploration by Michael Anderson Bradley
The Sword and the Grail: Of the Grail and the Templars and a True Discovery of America by Andrew Sinclair
The lost colony of the Templars : Verrazano's secret mission to America by Steven Sora
Templars in America: From the Crusades to the New World by Tim Wallace-Murphy
Swords at Sunset: Last Stand of North America's Grail Knights by Michael Bradley
19 more
The Lost Treasure of the Knights Templar: Solving the Oak Island Mystery by Steven Sora
The Knights Templar in the New World : how Henry Sinclair brought the Grail to Acadia by William F. Mann
The Templar meridians : the secret mapping of the New World by William F. Mann
Pirates and the lost Templar fleet : the secret naval war between the Knights Templar and the Vatican by David Hatcher Childress, 1957-
Lost secrets of the sacred ark : amazing revelations of the incredible power of gold by Laurence Gardner
The Hiram Key: Pharaohs, Freemasons and the Discovery of the Secret Scrolls of Jesus by Christopher Knight
The Atlantis Blueprint: Unlocking the Ancient Mysteries of a Long-Lost Civilization by Colin Wilson
Lost cities & ancient mysteries of the Southwest by David Hatcher Childress
The mystic symbol : mark of the Michigan mound builders by Henriette Mertz
Between the lines : the mystery of the giant ground drawings of ancient Nasca, Peru by Anthony F. Aveni
Mystery cave of many faces : first in a series on the saga of Burrows' Cave by Russell Burrows, (Russell E.), 1935-
The ruins of Great Ireland in New England ... by William B. Goodwin by William Brownell Goodwin, 1866-
Lost cities of Atlantis, ancient Europe & the Mediterranean by David Hatcher Childress, 1957-
Saga America by Barry Fell
The secret treasure of Oak Island : the amazing true story of a centuries-old treasure hunt by D'Arcy O'Connor
Lost cities of North and Central America by David Hatcher Childress
Peoples of the sea by Immanuel Velikovsky
Ancient mines of Kitchi-Gummi by Roger L. Jewell
The island of seven cities : where the Chinese settled when they discovered America by Paul Chiasson
Fewer