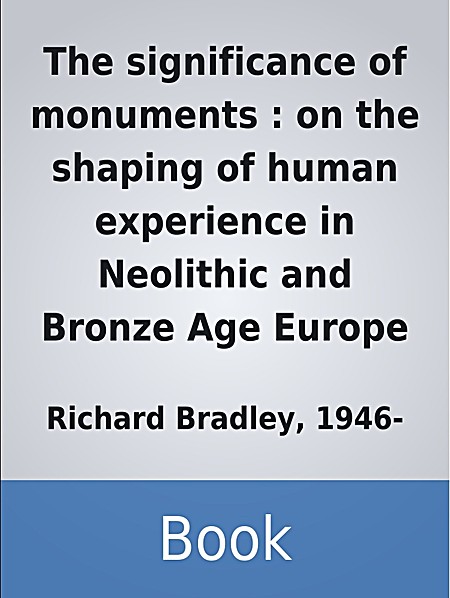 The significance of monuments : on the shaping of human experience in Neolithic and Bronze Age Europe

The Neolithic period, when agriculture began and many monuments - including Stonehenge - were constructed, is an era fraught with paradoxes and ambiguities. Starting in the Mesolithic and carrying his analysis through to the Late Bronze Age, Richard Bradley sheds light on this complex period and the changing consciousness of these prehistoric peoples. The Significance of Monuments studies the importance of monuments tracing their history from their first creation over six thousand years later. Part One discusses how monuments first developed and their role in developing a new sense of time and space among the inhabitants of prehistoric Europe. Other features of the prehistoric landscape - such as mounds and enclosures - across Continental Europe are also examined. Part Two studies how such monuments were modified and reinterpreted to suit the changing needs of society through a series of detailed case studies. The Significance of Monuments is an indispensable text for all students of European prehistory. It is also an enlightening read for professional archaeologists and all those interested in this fascinating period.… (more)

Inside the Neolithic Mind: Consciousness, Cosmos, and the Realm of the Gods by David Lewis-Williams
Prehistoric Avebury by Aubrey Burl
Newgrange : archaeology, art, and legend by Michael J. O'Kelly
An archaeology of natural places by Richard Bradley, 1946-
The Lost Civilizations of the Stone Age by Richard Rudgley
11 more
A guide to the Stone Circles of Britain, Ireland, and Brittany by Aubrey Burl
The man in the ice : the discovery of a 5,000-year-old body reveals the secrets of the stone age by Konrad Spindler, 1939-
Prehistoric Britain by Timothy Darvill
Before civilization: the radiocarbon revolution and prehistoric Europe by Colin Renfrew
Facing the ocean : the Atlantic and its peoples, 8000 BC-AD 1500 by Barry W. Cunliffe
The living goddesses by Marija Alseikaitė Gimbutas
World prehistory: a new outline by Grahame Clark
Archaeology, an introduction : the history, principles, and methods of modern archaeology by Kevin Greene
The civilization of the goddess by Marija Alseikaitė Gimbutas
The prehistory of Britain and Ireland by Richard Bradley, 1946-
Archaeology, the basics by Clive Gamble
Fewer