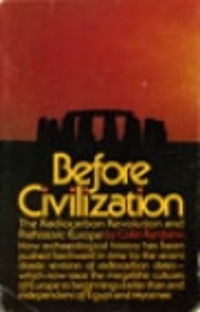 Before civilization : the radiocarbon revolution and prehistoric Europe

The refinement of radiocarbon dating using the information form tree-ring counts has raised serious doubts about the accepted theoretical frameowkr of European prehistory. Monuments in Central and Western Europe have proved to be considerably older than their supposed Near-Eastern forerunners, and the record must be almost completely rewritten in the light of these new dates. Before Civilsation is a preliminary attempt to do this with the help of analogies from more recent and well-documented primitive societies. The more glaring inconsistencies in the old theory are re-examined and Professor Renfrew shows convincingly how the baffling monuments of prehistoric Europe, like Stonehenge, could have been built without recourse to help from the 'more civilized' Near East.… (more)

LibraryThing member edwinbcn
Although the first six chapters (130 pages) are rather specialised and technical, they do form the basis for a very convincing and interesting second part of the book, I found the second part of the book (Chapt seven ff) especially very interesting because of its approach to prehistory by comparing
Show More
the life of prehistoric man with life in a number of primitive or disappeared civilisations, thus offering possible explanations for developments in Europe. Besides Bronze Age Britain, I much enjoyed the sections on Malta, Crete, Easter Island, Tahiti and the North American Hopi Indian.
Show Less

Prehistoric Avebury by Aubrey Burl
Stonehenge Decoded by Gerald S. Hawkins
World prehistory: a new outline by Grahame Clark
Ancient Europe from the beginnings of agriculture to classical antiquity; a survey. by Stuart Piggott
People of the earth : an introduction to world prehistory by Brian M. Fagan
21 more
Archaeology and language : the puzzle of Indo-European origins by Colin Renfrew
The modern antiquarian : a pre-millennial odyssey through megalithic Britain : including a gazetteer to over 300 prehistoric sites by Julian Cope
The goddesses and gods of Old Europe, 6500-3500 BC, myths and cult images by Marija Alseikaitė Gimbutas
Megaliths and their mysteries : a guide to the standing stones of Europe by Alastair Service
The Lost Civilizations of the Stone Age by Richard Rudgley
The dawn of European civilization. by V. Gordon Childe, (Vere Gordon), 1892-1957
After the Ice: A Global Human History 20,000-5000 BC by Steven Mithen
The origins of Britain by Lloyd Laing
Prehistoric stone circles by Aubrey Burl
A guide to the Stone Circles of Britain, Ireland, and Brittany by Aubrey Burl
Atlas of ancient archaeology by Jacquetta Hopkins Hawkes
The man in the ice : the discovery of a 5,000-year-old body reveals the secrets of the stone age by Konrad Spindler, 1939-
What happened in history, by V. Gordon Childe, (Vere Gordon), 1892-1957
The language of the goddess : unearthing the hidden symbols of western civilization by Marija Alseikaitė Gimbutas
From Carnac to Callanish : the prehistoric stone rows and avenues of Britain, Ireland, and Brittany by Aubrey Burl
The pyramids of Egypt by I. E. S. (Iorwerth Eiddon Stephen) Edwards, 1909-
Mysteries of the ancient world by Toni Eugene
Prehistoric societies by Grahame Clark, 1907-
The mummies of Urumchi by E. J. W. Barber
In search of the Indo-Europeans : language, archaeology, and myth by J. P. Mallory
Circles and Standing Stones: An Illustrated Exploration of Megalith Mysteries of Early Britain by Evan Hadingham
Fewer