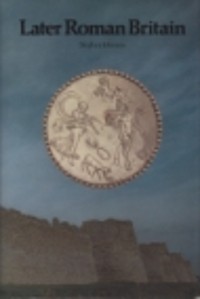 Britain before the Conquest (4)

Later Roman Britain, first published in 1980, charts the end of Roman rule in Britain and gives an overall impression of the beginning of the so-called 'Dark Ages' of British history, the transitional period which saw the breakdown of Roman administration and the beginnings of Saxon settlement. Stephen Johnson traces the flourishing of Romano-British society and the pressures upon it which produced its eventual fragmentation, examining the province's barbarian neighbours and the way the defence was organised against the many threats to its security. The final chapters, using mainly the findings of recent archaeology, assess the initial arrival of the Saxon settlers, and indicate the continuity of life between late Roman and early Saxon England. Later Roman Britaingives a fascinating glimpse of a period scarce with historical sources, but during which changes fundamental to the formation of modern Britain began to take place.… (more)