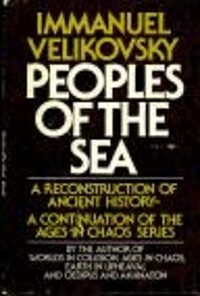 Peoples of the sea

"Peoples of the Sea" is, in some sense, the culmination of the series "Ages in Chaos." In this volume the erroneous time shift of classical history reaches its maximum span - 800 years With carefully documented evidence and indisputable arguments, Velikovsky places Ramses III firmly into the 4th century B.C. thereby solving, once and for all, numerous conundrums that historians had been confronted with in the past. He unveils the surprising identity of the so-called "Peoples of the Sea," clarifies the role of the Philistines and solves the enigma of the Dynasty of Priests. This volume leads Velikovsky's revised chronology up to the time of Alexander where it links-up with the records of classical chronology. In an extensive supplement Velikovsky delves into the fundamental question of how such a dramatic shift in chronology could have come about. Analyzing the main pillars of Egyptian chronology, he points out where the most dramatic mistakes were made and addresses the misunderstanding underlying the "astronomical chronology." In a further supplement he discusses the very interesting conclusions that can be drawn from radiocarbon testing on Egyptian (archeological) finds.… (more)

Worlds in Collision by Immanuel Velikovsky
Oedipus and Akhnaton: myth and history. by Immanuel Velikovsky, 1895-1979
Voices of the rocks : a scientist looks at catastrophes and ancient civilizations by Robert M. Schoch
Centuries of darkness : a challenge to the conventional chronology of Old World archaeology by Peter (Peter J.) James
Maps of the ancient sea kings; evidence of advanced civilization in the ice age. by Charles H. Hapgood
14 more
Ancient astronauts, cosmic collisions, and other popular theories about man's past by William H Stiebing
America B.C. : ancient settlers in the New World by Barry Fell
The Magic of Obelisks by Peter Tompkins
Beneath the pyramids : Egypt's greatest secret uncovered by Andrew Collins, 1957-
The Sphinx mystery : the forgotten origins of the sanctuary of Anubis by Robert K. G. Temple
The path of the Pole by Charles H. Hapgood
Gods of the Cataclysm: A revolutionary investigation of man and his gods before and after the Great Cataclysm by Hugh Fox
Voyages of the Pyramid Builders: The True Origins of the Pyramids from Lost Egypt to Ancient America by Robert M. Schoch
The Atlantis Blueprint: Unlocking the Ancient Mysteries of a Long-Lost Civilization by Colin Wilson
The Egypt Code by Robert Bauval
Saga America by Barry Fell
The secret of the Incas : myth, astronomy, and the war against time by William Sullivan
The Hiram Key: Pharaohs, Freemasons and the Discovery of the Secret Scrolls of Jesus by Christopher Knight
The view over Atlantis by John F. Michell
Fewer