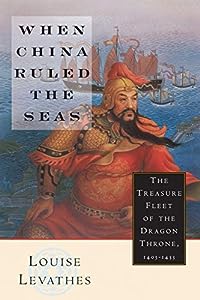 When China ruled the seas: the treasure fleet of the Dragon Throne, 1405-1433

"It seems as fantastic as a dream: less than a hundred years before Columbus and the dawn of the great age of European exploration, in the amazingly brief period from 1405 to 1433, China ruled the world's oceans. Under the command of the eunuch admiral Zheng He, fleets of more than three hundred "treasure ships" - some measuring as much as 400 feet long, with crews of 28,000 men - made seven epic voyages through the China Seas and the Indian Ocean. Unrivaled in size until the invasion fleets of World War I, the fleets traveled from Taiwan to the Red Sea, down the east coast of Africa, China's El Dorado, and perhaps even to Australia, three hundred years before Captain Cook's "discovery."" "Bearing a costly cargo of the Ming empire's finest silks, porcelains, and lacquerware, the treasure fleets ventured forth ready to trade with all who recognized the authority of the dragon throne, occupied at the time by the ambitious Zhu Di, who also built Beijing's Forbidden City. Far more than mere commercial missions, however, the expeditions churned up political and cultural currents in southeast Asia and precipitated the diaspora of the Chinese throughout the Indian Ocean basin." "Half the world was thus in China's grasp, and the rest could easily have been, had the emperor so wished. But instead China turned inward, resulting in the rapid demise of its navy and the loss of its technological and scientific edge over Europe. As had happened many times before in the country's history - and has happened many times since - the gates that had swung so wide clanged shut, and China's period of greatest expansion was followed by that of its greatest isolation." "When China Ruled the Seas is popular history at its best. Drawing on new translations of eye-witness accounts and official Ming histories, and including dozens of vivid illustrations, this is the first full account of one of the most colorful chapters in China's past and its sudden, enigmatic end."--BOOK JACKET.Title Summary field provided by Blackwell North America, Inc. All Rights Reserved… (more)

LibraryThing member RicDay
This is by far the best book I have read on China's exploration of the Indian Ocean and the great voyages undertaken by Admiral Zheng He.
3 more
LibraryThing member DinadansFriend
An in-depth look at how the voyages of the earlier Ming Ruler covered the Indian Ocean and reached the East Coast of Africa. Certainly not so sensationalist as "1421" and the following books on this theme, but factual and informative about a shining moment in exploration, and a warning of how
Show More
short-term politics can permanently warp a scientific community and the life of a major Civilization.
Show Less
LibraryThing member Freeoperant
Very interesting book. Seems well documented, but I would like to see a more recent book on the same topic.
LibraryThing member DoskoiPanda
A very readable history book, focused on the impact of China's imperial fleet in Asia and abroad, but also telling the story of the Emperor's friendship with a Eunuch who had served him from childhood, and went on to be trusted with the treasure fleet, returning to China with tribute and reports of
Show More
favourable negotiations.
Show Less
Fewer