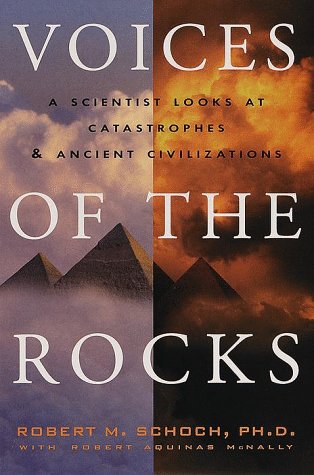 Voices of the rocks : a scientist looks at catastrophes and ancient civilizations

Could the Egyptian Sphinx have been built many centuries earlier than conventional history would have us believe? Could the great natural disasters that propelled the evolution of life on Earth have played a dominant role as well in the rise and fall of civilizations? Could Earth have been home to civilizations far greater in number -- and far older -- than orthodox researchers have suspected? In Voices of the Rocks, Dr. Robert M. Schoch examines these and other crucial questions about our past and shows how the answers can guide us in the future. In 1990, Robert Schoch, a scientist and tenured university professor, traveled to Egypt and conducted geological testing to evaluate the accepted date for the construction of the Great Sphinx of Giza. His research revealed that the Sphinx is actually thousands of years older than previously supposed, a discovery that upended the standard history of ancient Egypt.        Following the intellectual trail uncovered by his redating of the Sphinx, Schoch became convinced that we are in the midst of a profound scientific paradigm shift. The predominant notion that our species inhabits a slow-changing, steady-state planet is falling by the wayside. Instead, we are coming to see that the history of Earth, all living beings, and human civilizations comprises a series of stops and starts, in which equilibrium abruptly ends during a sudden severe catastrophe, like the extraterrestrial impact that initiated the extinction of the dinosaurs. Meteors, asteroids, and comets are potential sources of such disasters, as are shifts in Earth's axis, movements of the continents, volcanic eruptions, and earthquakes.        According to Dr. Schoch, Earth's long, catastrophic history has obscured and obliterated evidence of lost civilizations. But the traces remain for those who know where to look and what to look for. At its core, Voices of the Rocks is the story of Schoch's own search, his fascinating discoveries, and the warnings we must heed if we wish to survive whatever catastrophes the future has in store for us.… (more)

LibraryThing member mattries37315
The question on how to view the physical changes of the Earth as well as how and if it effects civilization, dominates the discussion in Dr. Robert M. Schoch’s Voices of the Rocks. Looking through the geological record as well as numerous other sciences, Dr. Schoch puts forwards a different way to look at the history of the Earth and how mankind is affected.

The primary purpose of Dr. Schoch’s book is to propose a different way of viewing how natural laws and processes operate in the universe from the (then) dominate Uniformitarianism and the opposing Catastrophism. The result is a synthesis of the two viewpoints, uniformitarianism with periodic catastrophes which how now become dominate in scientific thinking, however Schoch attaches this synthesis with the Gaia hypothesis that at the time was still be debated but is now being included in larger scientific thought. Although this scientific terminology might seem daunting Schoch writes for the layman who might remember things for high school or college, but isn’t an expert.

Although Schoch’s main emphasis is scientific thought, the subtitle of his book “A Scientist Looks at Catastrophes & Ancient Civilizations” points to the fact that Schoch takes a look at human history as well. Schoch came to fame when he released his geological study on the Great Sphinx that dated it to 7000-5000BCE, much older than the 2500BCE that Egyptologists have dated it. Schoch defends his findings in the case of the Sphinx in terms for a layman but doesn’t go in-depth in detail and terminology as that is not his main purpose in the book. However, Schoch uses his study and the ensuing debate about the progress of civilization and societies to highlight how the rise and collapse of many cultures over time and around the world have been impacted by catastrophic factors both on Earth and from outside of Earth.

While Schoch admits that many of the theories about civilizations and events in Earth’s past are based on his interruption of the evidence proposed either by himself or others who’s work he agrees with, they are an invaluable read whether one agrees with Schoch or not. Yet Schoch also aims at debunking many, some would call them outlandish, theories proposed by von Daniken, Hancock, Stitchin, and many others by the same process of looking at the evidence. Overall while Schoch does incorporate a study of ancient civilizations and societies while looking at his overarching scientific premise, it is more a supporting role.

Overall Schoch’s handles the science very well, his handle on history and societal elements he brings up is unfortunately not so good with many glaring mistakes that even a causal reader will catch. Schoch’s writing style is very fluid and keeps the reader engaged throughout the text, even when his mishandles either history or ancient cultural references. I came to this book with an eye towards the ‘ancient civilization’ in the subtitle in researching for a story I’ve been planning to write for over a decade and while I didn’t get exactly what I was expecting, the scientific information and Schoch relating of his own theories or the theories of other established scientists more than made up for that. Yet I can neither recommend nor warn people way from this book because my purpose for reading is something different from the norm.… (more)

The Lost Civilizations of the Stone Age by Richard Rudgley
Forbidden archeology : the hidden history of the human race by Michael A. Cremo
Fingerprints Of The Gods: The Evidence of Earth's Lost Civilization by Graham Hancock
Peoples of the sea by Immanuel Velikovsky
Heaven's mirror : quest for the lost civilization by Graham Hancock
23 more
The lost continent of Mu by James Churchward, 1852-1936
Worlds in Collion by Immanuel Velikovsky
Maps of the ancient sea kings; evidence of advanced civilization in the ice age. by Charles H. Hapgood
Earth under fire : humanity's survival of the Ice Age by Paul A. LaViolette
Oedipus and Akhnaton: myth and history. by Immanuel Velikovsky, 1895-1979
Lost star of myth and time by Walter Cruttenden
The end of Eden : the comet that changed civilization by Graham Phillips
Frauds, myths, and mysteries : science and pseudoscience in archaeology by Kenneth L. Feder
The path of the Pole by Charles H. Hapgood
Atlantis, The Antediluvian World by Ignatius Donnelly
The Hiram Key: Pharaohs, Freemasons and the Discovery of the Secret Scrolls of Jesus by Christopher Knight
Uriel's machine : the ancient origins of science by Christopher Knight, 1950-
The cycle of cosmic catastrophes : flood, fire, and famine in the history of civilization by Richard B. Firestone
Voyages of the Pyramid Builders: The True Origins of the Pyramids from Lost Egypt to Ancient America by Robert M. Schoch
Serpent in the sky : the high wisdom of ancient Egypt by John Anthony. West
The Egypt Code by Robert Bauval
The Science of the Dogon: Decoding the African Mystery Tradition by Laird Scranton
The Atlantis Blueprint: Unlocking the Ancient Mysteries of a Long-Lost Civilization by Colin Wilson
Atlantis of the West: The Case For Britain's Drowned Megalithic Civilization by Paul Dunbavin
The Velikovsky heresies : worlds in collision and ancient catastrophes revisited by Laird Scranton, 1953-
Forgotten civilization : the role of solar outbursts in our past and future by Robert M. Schoch
Signs in the Sky: Prophecies for the birth of a New Age by Adrian Gilbert
Mysteries of ancient South America by Harold Tom Wilkins, 1891-
Fewer