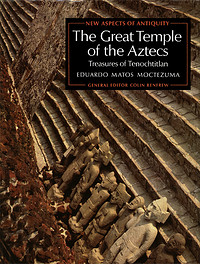 The great temple of the Aztecs : treasures of Tenochtitlan

The Aztecs have fascinated and horrified Westerners for centuries. After Cortes' extraordinary conquest of the New World's most powerful civilization in 1521, the Aztec capital, Tenochtitlan, was levelled and its Great Temple demolished. Soon even the location of the old cult centre was lost - until 1978, when tunnelling for Mexico City's subway system unearthed clues that led to the rediscovery of the Great Temple and the most spectacular series of excavations ever conducted in Mexico.

Scribes, warriors, and kings : the city of Copán and the ancient Maya by William Leonard Fash
Mexico by Michael D. Coe
A forest of kings : the untold story of the ancient Maya by Linda Schele
The Aztecs by Richard F. Townsend
Prehistory of the Americas by Stuart J. Fiedel
16 more
La vie quotidienne des Azteques a la veille de la conquete espagnole. by Jacques Soustelle, 1912-
The Toltecs, until the fall of Tula by Nigel Davies
Archaeology of Precolumbian Florida by Jerald T. Milanich
Chalcatzingo, excavations on the Olmec frontier by David C. Grove
Lost cities of the ancient Southeast by Mallory McCane O'Connor
Skywatchers by Anthony F. Aveni
Pre-Columbian cities by Jorge Enrique Hardoy
Prehistoric Mesoamerica by Richard E. W. Adams
Facts and artifacts of ancient Middle America : a glossary of terms and words used in the archaeology and art history of pre-Columbian Mexico and Central America by Curt Muser
Lost kingdoms of the Maya by Gene S. Stuart
The Maya by Michael D. Coe
Mysteries of the Mexican pyramids by Peter Tompkins
The code of kings : the language of seven sacred Maya temples and tombs by Linda Schele
A history of American archaeology by Gordon Randolph Willey, 1913-
The land of prehistory : a critical history of American archaeology by Alice Beck Kehoe, 1934-
The olmec world by Ignacio Bernal
Fewer