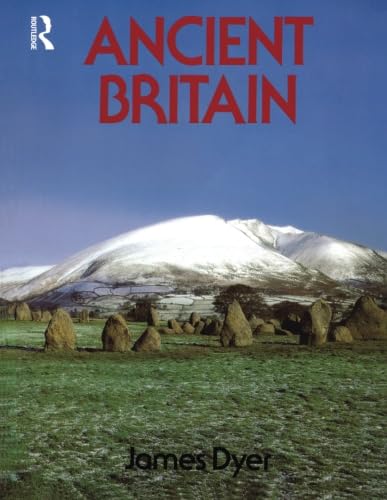 This book is for anyone starting out to understand the prehistoric life of Britain from the first human occupation 450,000 years ago, until the Roman conquest in AD 43. James Dyer here succeeds in bringing to life a thriving picture of the people and customs of the Stone, Bronze and Iron Ages, based on the sometimes sparse clues presented by prehistoric archaeological sites across Britain. For many readers, Ancient Britain will provide the first chance to get to grips with the present state of our knowledge of prehistoric agriculture, settlement, trade and ritual. The rise of power, with the development of a class system at the hands of the first metal users, is charted through to the growth of wealth and the emergence of a warlike and advanced Iron Age society - a society that was nonetheless unable to withstand the might of Rome. With over 130 illustrations and photographs, including a number of specially drawn reconstructions, this highly visual book is an ideal primer for all students of prehistory and all those who are simply interested in the subject.… (more)

Prehistoric Britain by Timothy Darvill
British prehistory: A new outline by Colin Renfrew
A guide to prehistoric England by Nicholas Thomas
Prehistoric Avebury by Aubrey Burl
The modern antiquarian : a pre-millennial odyssey through megalithic Britain : including a gazetteer to over 300 prehistoric sites by Julian Cope
15 more
Ancient Scilly from the first farmers to the early Christians : an introduction and survey by Paul Ashbee
Prehistoric astronomy and ritual by Aubrey Burl
From Carnac to Callanish : the prehistoric stone rows and avenues of Britain, Ireland, and Brittany by Aubrey Burl
How ancient Europeans saw the world : vision, patterns, and the shaping of the mind in prehistoric times by Peter S. Wells
The origins of Britain by Lloyd Laing
Mysterious Britain by Janet Bord
Astrology and cosmology in the world's religions by Nicholas Campion
Introduction to British prehistory : from the arrival of Homo sapiens to the Claudian invasion by J. V. S. Megaw
The Making of the Middle Sea: A History of the Mediterranean from the Beginning to the Emergence of the Classical World by Cyprian Broodbank
A guide to the Stone Circles of Britain, Ireland, and Brittany by Aubrey Burl
Scotland Bc: An Introduction to the Prehistoric Houses, Tombs, Ceremonial Monuments, and Fortifications in the Care of the Secretary of State for Scotland (Historic Buildings and Monuments) by Anna Ritchie
The significance of monuments : on the shaping of human experience in Neolithic and Bronze Age Europe by Richard Bradley, 1946-
Secrets of the Ice Age : the world of the cave artists by Evan Hadingham
The first civilizations: the archaeology of their origins by Glyn Edmund. Daniel
Prehistoric Britain and Ireland by James L. Forde-Johnston
Fewer