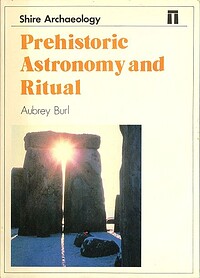 Stonehenge was not an observatory used by druidical astronomer-priests, but instead an almighty monument in which the moon, the sun, and the dead were joined together. In this compelling book, archaeological expert Aubrey Burl explains how, more than four thousand years ago, people in the British Isles identified life and death with the cycle of midwinter and midsummer, and with the rising and setting of the sun and moon. It is for this reason that so many megalithic monuments have astronomical sightlines bult into them. This book explores the development of astronomical customes in the British Isles, and, unlike other works about 'megalithic astronomy', keeps the techical explanations of azimuths and declinations to their simpliest, its emphasis being upon people rather than perturbations and eclipses.… (more)

Prehistoric stone circles by Aubrey Burl
Ancient Britain by James Dyer
The standing stones of Europe : a guide to the great megalithic monuments by Alastair Service
A guide to the Stone Circles of Britain, Ireland, and Brittany by Aubrey Burl
The stone circles of the British Isles by Aubrey Burl
20 more
The modern antiquarian : a pre-millennial odyssey through megalithic Britain : including a gazetteer to over 300 prehistoric sites by Julian Cope
Prehistoric Avebury by Aubrey Burl
Discovering hill figures. by Kate. Bergamar
The megalithic monuments of Britain and Ireland by Christopher Scarre
The astronomical significance of Stonehenge by C. A. (Cecil Augustus) Newham
A guide to prehistoric England by Nicholas Thomas
Ancient Monuments of Orkney by Great Britain: Department of the Environment
Newgrange : archaeology, art, and legend by Michael J. O'Kelly
Stone Age soundtracks : the acoustic archaeology of ancient sites by Paul Devereux
Stonehenge decoded by Gerald S. Hawkins
The Stones of Time: Calendars, Sundials, and Stone Chambers of Ancient Ireland by Martin Brennan
Megalithomania : artists, antiquarians, and archaeologists at the old stone monuments by John F. Michell
Prehistoric Britain by Timothy Darvill
Standing stones : Stonehenge, Carnac and the world of megaliths by Jean-Pierre Mohen
From Carnac to Callanish : the prehistoric stone rows and avenues of Britain, Ireland, and Brittany by Aubrey Burl
The Avebury cycle by Michael Dames
Stonehenge by Robin Heath
Megaliths, myths, and men: An introduction to astro-archaeology (Harper colophon books, CN 578) by Peter Lancaster Brown
Circles and Standing Stones: An Illustrated Exploration of Megalith Mysteries of Early Britain by Evan Hadingham
In search of ancient astronomies by E. C. Krupp
Fewer