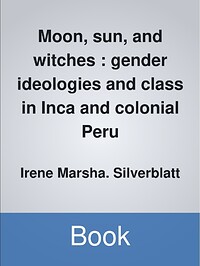 Moon, sun, and witches : gender ideologies and class in Inca and colonial Peru

When the Spanish arrived in Peru in 1532, men of the Inca Umpire worshipped the Sun as Father and their dead kings as ancestor heroes, while women venerated the Moon and her daughters, the Inca queens, as founders of female dynasties. In the pre-Inca period such notions of parallel descent were expressions of complementarity between men and women. Examining the interplay between gender ideologies and political hierarchy. Irene Silverblatt shows how Inca rulers used their Sun and Moon traditions as methods of controlling women and the Andean peoples the Incas conquered. She then explores the process by which the Spaniards employed European male and female imageries to establish their own rule in Peru and to make new inroads on the power of native women, particularly poor peasant women. Harassed economically and abused sexually, Andean women fought back, earning in the process the Spaniards' condemnation as "witches." Fresh from the European witch hunts that damned women for susceptibility to heresy and diabolic influence, Spanish clerics were predisposed to charge politically disruptive poor women with witchcraft. Professor Silverblatt shows that these very accusations provided women with an ideology of rebellion and a method for defending their culture.… (more)

LibraryThing member AlexTheHunn
Irene Silverblatt examines the effects of the Spanish conquest on women’s place in Peruvian society. In a straightforward and uncomplicated way, Silverblatt lays out the material using a basic ‘before and after’ approach. She spends the first half describing pre-conquest Andean life, concentrating on women and their roles in society. Then she shows how life changed for the Andeans after the arrival of the Spanish. Again, she focuses on how those changes affected women, arguing that not only were women affected by the Spanish conquest but that they suffered far greater loss of position than their male counterparts.… (more)
1 more
LibraryThing member owen1218
It gets more interesting towards the end, but much of it is too dry and academic, more description than critique. A more overt critical viewpoint would have done it well. Still, maybe the best book on the history of gender in Peru.
Fewer

Peru's Indian peoples and the challenge of Spanish conquest : Huamanga to 1640 by Steve J. Stern
The Incas; the royal commentaries of the Inca, Garcilaso de la Vega, 1539-1616. by Garcilaso de la Vega, 1539-1616
Andean culture history, by Wendell Clark Bennett, 1905-1953.
The Incas : lords of the four quarters by Craig Morris, 1939-2006
The Incas by Terence N. D'Altroy
1 more
The ancient civilizations of Peru by John Alden Mason
Fewer