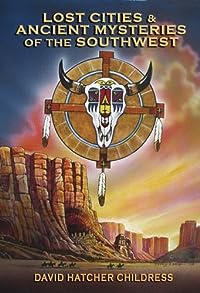 Popular Lost Cities author David Hatcher Childress takes to the road again in search of lost cities and ancient mysteries. This time he is off to the American Southwest, traversing the region's deserts, mountains and forests investigating archeological mysteries and the unexplained. Join David as he starts in northern Mexico and searches for the lost mines of the Aztecs. He continues north to west Texas, delving into the mysteries of Big Bend, including mysterious Phoenician tablets discovered there and the strange lights of Marfa. He continues northward into New Mexico where he stumbles upon a hollow mountain with a billion dollars of gold bars hidden deep inside it! In Arizona he investigates tales of Egyptian catacombs in the Grand Canyon, cruises along the Devil's Highway, and tackles the century-old mystery of the Superstition Mountains and the Lost Dutchman mine. In Nevada and California Childress checks out the rumors of mummified giants and weird tunnels in Death Valley, plus he searches the Mohave Desert for the mysterious remains of ancient dwellers alongside lakes that dried up tens of thousands of years ago. It's a full-tilt blast down the back roads of the Southwest in search of the weird and wondrous mysteries of the past!… (more)

Civilization one : the world is not as you thought it was by Christopher Knight, 1950-
Lost cities of Atlantis, ancient Europe & the Mediterranean by David Hatcher Childress, 1957-
Advanced Civilizations of Prehistoric America: The Lost Kingdoms of the Adena, Hopewell, Mississippians, and Anasazi by Frank Joseph
Discovering the Mysteries of Ancient America: Lost History and Legends, Unearthed and Explored by Frank Joseph
Heaven's mirror : quest for the lost civilization by Graham Hancock
19 more
Lost cities of North and Central America by David Hatcher Childress
Maps of the ancient sea kings; evidence of advanced civilization in the ice age. by Charles H. Hapgood
The Atlantis Blueprint: Unlocking the Ancient Mysteries of a Long-Lost Civilization by Colin Wilson
The Ancient Giants Who Ruled America: The Missing Skeletons and the Great Smithsonian Cover-Up by Richard J. Dewhurst
Atlantis in the Amazon: Lost Technologies and the Secrets of the Crespi Treasure by Richard Wingate
Fair Gods and Stone Faces by Constance Irwin
The Sirius Mystery: New Scientific Evidence of Alien Contact 5,000 Years Ago by Robert Temple
When time began by Zecharia Sitchin
Ancient Egypt 39,000 BCE: The History, Technology, and Philosophy of Civilization X by Edward F. Malkowski
Lost technologies of ancient Egypt : advanced engineering in the temples of the pharaohs by Christopher Dunn, 1946-
The Cygnus mystery : unlocking the ancient secret of life's origins in the cosmos by Andrew Collins, 1957-
Atlantis, The Antediluvian World by Ignatius Donnelly
The lost continent of Mu by James Churchward, 1852-1936
The sacred symbols of Mu by James Churchward, 1852-1936
Beneath the pyramids : Egypt's greatest secret uncovered by Andrew Collins, 1957-
Mysteries of ancient South America by Harold Tom Wilkins, 1891-
The Mayan Prophecies: Unlocking the Secrets of a Lost Civilization by Maurice Coterell
The Egypt Code by Robert Bauval
The Sphinx mystery : the forgotten origins of the sanctuary of Anubis by Robert K. G. Temple
Fewer