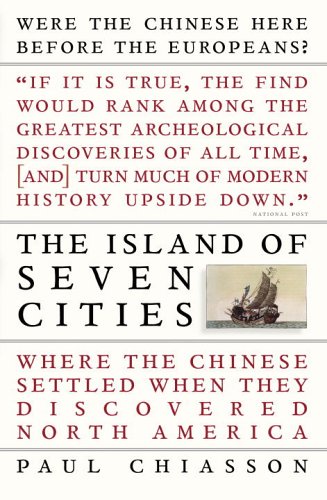 LibraryThing member iFool
This is a non-fiction that reads like a novel. The author took us on a personal journey of discovery where he played history detective on a ancient ruin the size of a shopping mall located on Cape Breton. Most of his research on the origin of the ruin was done at the Toronto Reference Library. Half of the book is on the early European explorations of the Maritime focusing on Cape Breton. This work contains all the intrigues of a treasure hunt. The book is surprisingly well written from someone that is not a professional writer or historian.… (more)
1 more
LibraryThing member jcprowe
The Island of Seven Cities: Where the Chinese Settled When They Discovered America by Paul Chiasson

For so many years, North Americans have been taught that Columbus was the discoverer of "The New World" when this could not be furthest from the truth. Vikings of the ninth century were crossing from Europe to Greenland and Iceland fairly regularly. The Vikings, in fact, established a colony on the northern end of Newfoundland. Chiasson presents his information that the Chinese actually settled on the northern end of Cape Breton Island, Nova Scotia, Canada.

The island of seven cities : where the Chinese settled when they discovered America by Paul Chiasson

1421 : the year China discovered America by Gavin Menzies
1434: the year a magnificent Chinese fleet sailed to Italy and ignited the Renaissance by Gavin Menzies
Saga America by Barry Fell
Who discovered America? : the untold history of the peopling of the Americas by Gavin Menzies
Mysteries of ancient South America by Harold Tom Wilkins, 1891-
19 more
Templars in America: From the Crusades to the New World by Tim Wallace-Murphy
Columbus Was Last by Patrick Huyghe
The lost empire of Atlantis : history's greatest mystery revealed by Gavin Menzies
Norse discoveries and explorations in America, 982-1362; Leif Erikson to the Kensington stone, by Hjalmar Rued Holand, 1872-1963
America B.C. : ancient settlers in the New World by Barry Fell
The Templar meridians : the secret mapping of the New World by William F. Mann
Unknown lands : the log books of the great explorers by François Bellec
The farfarers : before the Norse by Farley Mowat
Maps of the ancient sea kings; evidence of advanced civilization in the ice age. by Charles H. Hapgood
The fourth part of the world : the race to the ends of the Earth, and the epic story of the map that gave America its name by Toby Lester
When China ruled the seas: the treasure fleet of the Dragon Throne, 1405-1433 by Louise Levathes
The Exploration of North America, 1630-1776 by William Patterson Cumming
The Mysterious History of Columbus: An Exploration of the Man, the Myth, the Legacy by John Noble Wilford
Lost cities of North and Central America by David Hatcher Childress
The Vinland map and the Tartar relation by R. A. Skelton
Voyages of the Pyramid Builders: The True Origins of the Pyramids from Lost Egypt to Ancient America by Robert M. Schoch
American genesis: the American Indian and the origins of modern man by Jeffrey Goodman
The Voyage of the Matthew: John Cabot and the Discovery of America by P. L. Firstbrook
The man in the ice : the discovery of a 5,000-year-old body reveals the secrets of the stone age by Konrad Spindler, 1939-
Fewer