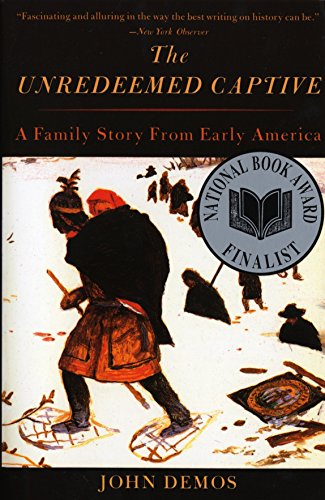 The unredeemed captive : a family story from early America

"Early on the morning of February 29, 1704, before the settlers of Deerfield, Massachusetts, had stirred from their beds, a French and Indian war party opened fire, wielding hatchets and torches, on the lightly fortified town. What would otherwise have been a fairly commonplace episode of "Queen Anne's War" (as the War of the Spanish Succession was known in the colonies) achieved considerable notoriety in America and abroad. The reason: the Indians had managed to capture, among others, the eminent minister John Williams, his wife, Eunice Mather Williams, and their five children. This Puritan family par excellence, and more than a hundred of their good neighbors, were now at the mercy of "savages"--And the fact that these "savages" were French-speaking converts to Catholicism made the reversal of the rightful order of things no less shocking." "In The Unredeemed Captive, John Demos, Yale historian and winner of the Bancroft Prize for his book Entertaining Satan, tells the story of the minister's captured daughter Eunice, who was seven years old at the time of the Deerfield incident and was adopted by a Mohawk family living at a Jesuit mission-fort near Montreal. Two and a half years later, when Reverend Williams was released and returned to Boston amid much public rejoicing, Eunice remained behind - her Mohawk "master" unwilling to part with her. And so began a decades-long effort, alternately hopeful and demoralizing for her kin, to "redeem" her. Indeed, Eunice became a cause celebre across New England, the subject of edifying sermons, fervent prayers, and urgent envoys between the Massachusetts Bay Colony and New France. But somehow she always remained just out of reach - until eventually, her father's worst fears were confirmed: Eunice was not being held against her will. On the contrary, she had forgotten how to speak English, had married a young Mohawk man, and could not be prevailed upon to return to Deerfield." "Eunice's extraordinary and dramatic story speaks to broad, compelling themes that involve race, religion, the place of women in two societies, and, above all, contact between cultures ("Captivity, after all, meant 'contact' of a particularly vivid sort") and the crossing of cultural boundaries. For both colonists and Indians, the stakes were high in early-eighteenth-century America. Hence the boundaries were carefully patrolled: "To travel across them was costly and dangerous - and potentially transforming." The Unredeemed Captive traces just such a transformation - remarkable, profound, and uniquely American."--Jacket.… (more)

LibraryThing member bks1953
In a word: magnificent. A fascianting and often poignant story of a family in very early 18th-century New England, specifically Massachusetts. In February of 1704, the hamlet of Deerfield was ambushed by a French/Native American raiding party. Some of the inhabitants were kiled, others were captured. This book is the story of that raid, as well as the story of colonial America, "where English, French and Indians faced one another across gulfs of culture and belief ..." Hugely recommended.… (more)
4 more
LibraryThing member labfs39
When forming the narrative of this book, historian John Demos, decided to focus on a single community and a single family to tell a story about the relationships between the New French and the New Englanders, the relationship between each of these groups with the local Native Americans, and how larger international conflicts effected the lives of everyone from Quebec and Montreal to Boston. The community the author chooses is the small frontier town of Deerfield, Massachusetts , and the family is that of Reverend John Williams.

In the early morning of February 29, 1704, a mixed force of nearly 50 French soldiers and officers and 200 "domiciled" Indians from the Abenaki, Huron, and Mohawk Iroquois tribes attacked Deerfield. The political aim was to capture someone valuable to trade for a prisoner the British were holding. In the resulting battle, 48 townspeople slain, 120 captives taken, and 140 survivors remained. In addition, not all of the captives survive the journey to Montreal, where most are "redeemed" and made prisoners of the French, or to assorted Indian villages north of Albany. Mr. Williams and three of his sons are redeemed immediately, one son and a daughter are taken to live in different tribal villages.

All of this occurs in the first chapter, the rest of the book focuses on broader themes, such as the meaning of redemption from the Indians to the descendents of the Puritans on the brink of the Great Awakening. Much of the New Englanders concern for their kin was not their physical safety, but the safety of their souls. The Jesuits had converted thousands of Indians to Catholicism, and the settlers were deathly afraid that the captured would be converted to evil popish ways and their souls lost forever. I had never realized that the majority of the Indian attackers were practicing Christians, that the majority of the captives never stayed in Indian villages, and that the British offered bounties for enemy scalps. My childhood history books seem to have gotten a few things wrong.

Changes in the land : Indians, colonists, and the ecology of New England by William. Cronon
A narrative of the life of Mary Jemison, the white woman of the Genessee, by James E. (James Everett) Seaver, 1787-1827
The ambiguous Iroquois empire : the Covenant Chain confederation of Indian tribes with English colonies from its beginnings to the Lancaster Treaty of 1744 by Francis Jennings
The invasion of America : Indians, colonialism, and the cant of conquest by Francis Jennings
American colonies by Alan Taylor
4 more
The captive : the true story of the captivity of Mrs. Mary Rowlandson among the Indians and God's faithfulness to her in her time of trial by Mary White Rowlandson, ca. 1635-1711
The Death and Rebirth of the Seneca by Anthony Wallace
A New England town : the first hundred years : Dedham, Massachusetts, 1636-1736 by Kenneth A. Lockridge
Women's Indian captivity narratives by Kathryn Zabelle Derounian-Stodola
Fewer