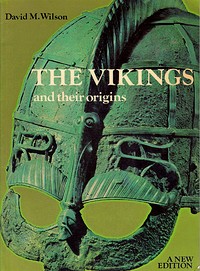 The Vikings and their origins

The Arena Chapel is a small plain brick building in Padua whose interior is entirely covered with frescoes by Giotto, painted shortly after 1300 and still miraculously intact. Thirty-six large panels tell the stories of Joachim and Anna (the Virgin's parents), the Virgin Mary, and the life of Jesus from birth to resurrection; and on the entrance wall opposite the altar is a Last Judgment. These frescoes have always been seen as the starting point of Renaissance art, and are among its most famous masterpieces. In 1961-64 the paintings and their setting were cleaned and restored, but they are still threatened by dust from the surrounding streets, damp, movement of the building's structure, and chemical pollutants. As part of a continuing conservation campaign, between 1988 and 1991 they were thoroughly examined and recorded in minute detail. The results of this recording are now made available for the first time in their entirety. All the paintings are shown complete and in a series of details, many of them actual size, in which expressions and brush strokes speak out vividly across seven hundred years. The reproductions are printed in color to the highest standard. Accompanying texts provide the art-historical background, explain the narratives, and describe the frescoes' survival through the centuries. Giotto: The Arena Chapel Frescoes captures as never before the artist's supreme achievement in all its epoch-making power - his magisterial representation of weight and volume, his genius for storytelling, his compassion and his irresistible sense of drama. This is the definitive record of one of Western art's greatest treasures.… (more)

The Vikings and their origins: Scandinavia in the first millennium by David M Wilson (Hardcover)