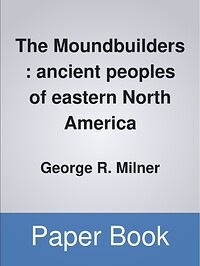 Nineteenth-century explorers of the American continent were amazed tofind great monuments built of earth in the Eastern Woodlands. Thousands of these mounds were discovered in the plains and forestssome up to a hundred feet high, some overgrown hillocks, some conical, others flat-topped. Speculation was rife as to the identity of the moundbuilders. As George Milner shows, research over the past century demonstrates conclusively that Native Americans built these mounds. In a period ranging from 3000 BC to the sixteenth century AD, North American Indians quarried tons of earth to form the monuments, which vary widely in location, size, and purpose. Some contained thousands of burials, others served as platforms for chiefs' residences, and many were low-lying "effigy" mounds in the form of serpents, panthers, and other sacred beasts. Moundbuilding was a key element in society--how people worshiped gods, buried the dead, remembered their ancestors, and respected their leaders--and many beautiful objects have been found inside the mounds, including artifacts of shell, copper, and mica. The Moundbuilders covers the entire sweep of Eastern Woodlands prehistory, with an emphasis on how societies developed from hunter-gatherers to village farmers and town-dwellers. Great strides have been made in recent research, and many of the most impressive mounds, such as Poverty Point, Cahokia, and Moundville, are described and discussed in detail. This wide-ranging and copiously illustrated book, complete with information on dozens of sites to visit, is the perfect guide to the region for tourists, archaeologists, and students.… (more)

LibraryThing member antiquary
I am not an expert on the Moundbuilders, but this seems to be a good solid book on its subject, and up-to-date for its time, about 14 years ago. It describes a long development of a series of cultures that built mounds in different parts of the eastern US (chiefly east of the Mississippi); the
Show More
cultures are described in roughly chronological order, though on of the author's points is that even with carbon dating and related techniques, the dates are far from exact. He sees the early cultures as hunter-gatherers whose food system presumably could not have supported real cities, though he argues even large mounds could be build by relatively small groups over long periods of time, perhaps centuries. Later peoples adopted "cultigens" (domesticated plants) but the local ones were original items like squashes and gourds, sunflowers and various grasses such as goosefoot (he says from experience that only necessity could make someone eat goosefoot porridge). Maize was brought in maybe 200 years ago, but only took off as a major food source about 1000 years ago. He also describes the burial practices -- some sites had a few high status graves with exotic grave goods (eg obsidian and mica and copper, even copper breastplates); others had more low-status graves dug into the same mound. He reports there weresome cases of skeletons showing clear signs of death from combat, but they were relatively rare, especially in the Adena-Hopewell era when rich exotic deposits suggest peaceful trade (or, he suggests, gifts to avert hostilities). The book goes all the way down to the arrival of Europeans --late grave goods include what may be Spanish bells, Overall, the book seems to be realistic, sensible and less melodramatic than, say, 1491. As usual in this series, there are a lot of good pictures and plans of sites.
Show Less

Indian mounds of the middle Ohio Valley : a guide to mounds and earthworks of the Adena, Hopewell, Cole, and Fort Ancient people by Susan L. Woodward
The mound builders by Robert Silverberg
Ancient peoples of the American Southwest by Stephen Plog
Hidden cities : the discovery and loss of ancient North American civilization by Roger G. Kennedy
Cahokia : ancient America's great city on the Mississippi by Timothy R. Pauketat
28 more
The Aztecs by Richard F. Townsend
Ancient monuments of the Mississippi Valley, comprising the results of extensive original surveys and explorations, by E. G. (Ephraim George) Squier, 1821-1888
The great journey : the peopling of ancient America by Brian M. Fagan
Native Americans before 1492 : the moundbuilding centers of the eastern woodlands by Lynda Shaffer, 1944-
Ancient North America : the archaeology of a continent by Brian M. Fagan
Chronicle of the Maya kings and queens : deciphering the dynasties of the ancient Maya by Simon Martin
America's ancient cities by Gene S. Stuart
Cahokia, city of the sun : prehistoric urban center in the American Bottom by Claudia Gellman Mink
The Vikings and America by Erik Wahlgren
Lost cities of the ancient Southeast by Mallory McCane O'Connor
Cahokia Mounds: America's First City (Landmarks) by William Iseminger
The code of kings : the language of seven sacred Maya temples and tombs by Linda Schele
Exploring Native North America by David Hurst Thomas
The Southeastern Indians by Charles M. Hudson
The Hopi villages : the ancient province of Tusayan by John Wesley Powell, 1834-1902.
Bones, boats & bison : archeology and the first colonization of western North America by E. James Dixon
Across Atlantic ice : the origin of America's Clovis culture by Dennis J. Stanford
The great temple of the Aztecs : treasures of Tenochtitlan by Eduardo Matos Moctezuma
First peoples in a new world : colonizing ice age America by David J. Meltzer
Archaeology of the Lower Ohio River Valley by Jon Muller
1491 : new revelations of the Americas before Columbus by Charles C. Mann
The first Americans : in pursuit of archaeology's greatest mystery by J. M. Adovasio
Prehistory of the Americas by Stuart J. Fiedel
Anasazi America : seventeen centuries on the road from center place by David E. Stuart
Koster : Americans in search of their prehistoric past by Stuart Struever
The early settlement of North America : the Clovis era by Gary Haynes
The Maya by Michael D. Coe
Search for the first Americans by David J. Meltzer
Fewer