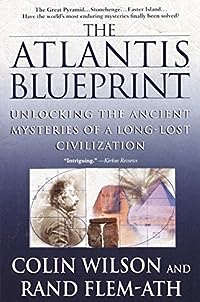 The Atlantis Blueprint: Unlocking the Ancient Mysteries of a Long-Lost Civilization

In 1982, the American scholar Charles Hapgood made an astonishing claim to a young librarian, Rand Flem-Ath - that civilization was almost 100,000 years old & he had the evidence to prove it. Before he could substantiate this remarkable assertion, Hapgood died. Together with fellow author Colin Wilson, Flem-Ath set out to track down the truth behind the scholar's statements. Their study of the world's most sacred sites - Stonehenge, the Great Pyramids and many others - led them to an amazing discovery. Far from being built by local people for local reasons, these monuments formed an undeniable geometrical pattern. This is turn implied the existence of an ancient advanced civilization, one that existed before the Flood that destroyed Atlantis & whose knowledge of the world was far wider than had previously been thought possible. This book deciphers this remarkable code & the reasons behind it: the attempt by scientists from Atlantis to preserve a legacy of their civilisation. The book presents its argument with enormous persuasiveness - namely that our civilization is not the first to occupy the planet, nor is it likely to be the last.… (more)

The Atlantis Blueprint: Unlocking the Ancient Mysteries of a Long-Lost Civilization by Colin Wilson (Hardcover)

Heaven's mirror : quest for the lost civilization by Graham Hancock
The Message of the Sphinx: A Quest for the Hidden Legacy of Mankind by Graham Hancock
Atlantis, The Antediluvian World by Ignatius Donnelly
The World's Last Mysteries by Reader's Digest
Fingerprints Of The Gods: The Evidence of Earth's Lost Civilization by Graham Hancock
16 more
Maps of the ancient sea kings; evidence of advanced civilization in the ice age. by Charles H. Hapgood
The Hiram Key: Pharaohs, Freemasons and the Discovery of the Secret Scrolls of Jesus by Christopher Knight
The lost continent of Mu by James Churchward, 1852-1936
The Sign and the Seal: The Quest for the Lost Ark of the Covenant by Graham Hancock
Voyages of the Pyramid Builders: The True Origins of the Pyramids from Lost Egypt to Ancient America by Robert M. Schoch
Holy Blood, Holy Grail: The Secret History of Christ & The Shocking Legacy of the Grail by Michael Baigent
The Sirius Mystery: New Scientific Evidence of Alien Contact 5,000 Years Ago by Robert Temple
The path of the Pole by Charles H. Hapgood
The new view over Atlantis by John F. Michell
The Egypt Code by Robert Bauval
Edgar Cayce on Atlantis. by Edgar Evans Cayce
Civilization one : the world is not as you thought it was by Christopher Knight, 1950-
Stonehenge Decoded by Gerald S. Hawkins
The Giza Power Plant : Technologies of Ancient Egypt by Christopher Dunn
The Lost Civilizations of the Stone Age by Richard Rudgley
Uriel's Machine: Uncovering the Secrets of Stonehenge, Noah's Flood and the Dawn of Civilization by Christopher Knight
Fewer