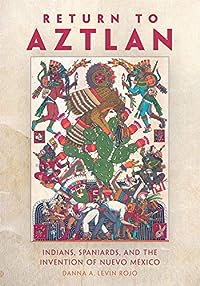 Return to Aztlan : Indians, Spaniards, and the invention of Nuevo Mexico

Long before the Spanish colonizers established it in 1598, the "Kingdom of Nuevo México" had existed as an imaginary world--and not the one based on European medieval legend so often said to have driven the Spaniards' ambitions in the New World. What the conquistadors sought in the 1500s, it seems, was what the native Mesoamerican Indians who took part in north-going conquest expeditions also sought: a return to the Aztecs' mythic land of origin, Aztlan. Employing long-overlooked historical and anthropological evidence, Danna A. Levin Rojo reveals how ideas these natives held about their own past helped determine where Spanish explorers would go and what they would conquer in the northwest frontier of New Spain--present-day New Mexico and Arizona. Return to Aztlan thus remaps an extraordinary century during which, for the first time, Western minds were seduced by Native American historical memories. Levin Rojo recounts a transformation--of an abstract geographic space, the imaginary world of Aztlan, into a concrete sociopolitical place. Drawing on a wide variety of early maps, colonial chronicles, soldier reports, letters, and native codices, she charts the gradual redefinition of native and Spanish cultural identity--and shows that the Spanish saw in Nahua, or Aztec, civilization an equivalence to their own. A deviation in European colonial naming practices provides the first clue that a transformation of Aztlan from imaginary to concrete world was taking place: Nuevo México is the only place-name from the early colonial period in which Europeans combined the adjective "new" with an American Indian name. With this toponym, Spaniards referenced both Mexico-Tenochtitlan, the indigenous metropolis whose destruction made possible the birth of New Spain itself, and Aztlan, the ancient Mexicans' place of origin. Levin Rojo collects additional clues as she systematically documents why and how Spaniards would take up native origin stories and make a return to Aztlan their own goal--and in doing so, overturns the traditional understanding of Nuevo México as a concept and as a territory. A book in the Latin American and Caribbean Arts and Culture initiative, supported by the Andrew W. Mellon Foundation… (more)