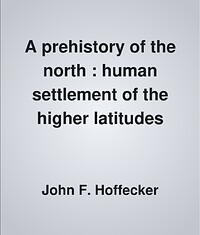 A prehistory of the north : human settlement of the higher latitudes

Early humans did not simply drift northward from their African origins as their abilities to cope with cooler climates evolved. The initial settlement of places like Europe and northern Asia, as well as the later movement into the Arctic and the Americas, actually occurred in relatively rapid bursts of expansion. A Prehistory of the North is the first full-length study to tell the complex story, spanning almost two million years, of how humans inhabited some of the coldest places on earth. In an account rich with illustrations, John Hoffecker traces the history of anatomical adaptations, diet modifications, and technological developments, such as clothing and shelter, which allowed humans the continued ability to push the boundaries of their habitation. The book concludes by showing how in the last few thousand years, peoples living in the circumpolar zone--with the exception of western and central Siberia--developed a thriving maritime economy. Written in nontechnical language, A Prehistory of the North provides compelling new insights and valuable information for professionals and students.… (more)

A prehistory of the north : human settlement of the higher latitudes by John F. Hoffecker

Lithic technology : measures of production, use, and curation by William Andrefsky
The prehistory of Britain and Ireland by Richard Bradley, 1946-
Neanderthal : neanderthal man and the story of human origins by Paul Jordan
Folsom : new archaeological investigations of a classic Paleoindian bison kill by David J. Meltzer
After the Ice: A Global Human History 20,000-5000 BC by Steven Mithen
7 more
After the Ice Age : the return of life to glaciated North America by E. C. Pielou, 1924-
Ancient Nasca settlement and society by Helaine Silverman
Cro-Magnon : how the Ice Age gave birth to the first modern humans by Brian M. Fagan
Before civilization: the radiocarbon revolution and prehistoric Europe by Colin Renfrew
Ancestral journeys : the peopling of Europe from the first venturers to the Vikings by Jean Manco
World prehistory: a new outline by Grahame Clark
The archaeology of Town Creek by Edmond A. Boudreaux
Fewer