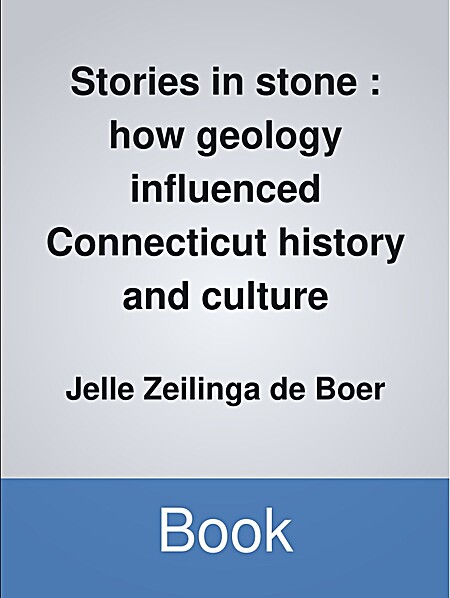 Stories in stone : how geology influenced Connecticut history and culture

In a series of entertaining essays, geoscientist Jelle Zeilinga de Boer describes how early settlers discovered and exploited Connecticut's natural resources. Their successes as well as failures form the very basis of the state's history: Chatham's gold played a role in the acquisition of its Charter, and Middletown's lead helped the colony gain its freedom during the Revolution. Fertile soils in the Central Valley fueled the state's development into an agricultural power house, and iron ores discovered in the western highlands helped trigger its manufacturing eminence. The Statue of Liberty, a quintessential symbol of America, rests on Connecticut's Stony Creek granite. Geology not only shaped the state's physical landscape, but also provided an economic base and played a cultural role by inspiring folklore, paintings, and poems. Illuminated by 50 illustrations and 12 color plates, Stories in Stone describes the marvel of Connecticut's geologic diversity and also recounts the impact of past climates, earthquakes, and meteorites on the lives of the people who made Connecticut their home.… (more)

LibraryThing member Hebephrene
This is a portrait of geology in Connecticut as well as a history of the state's use (and depletion) of its natural resources. The author, a professor at Wesleyan, is taking a victory lap at the end of his career. Nonetheless the opening chapters including his discussions of the Connecticut River valley are great. Had he done as thorough a job on either the Eastern or Western part of the state I would have been much happier, but he seemed to run out of steam.… (more)