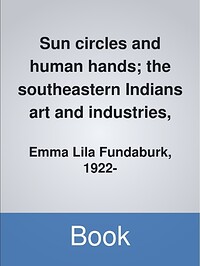 This classic compendium of ancient Indian artifacts from the entire southeastern United States remains an indispensable reference source for professionals and enthusiasts alike. From utilitarian arrowheads to beautiful stone effigy pipes to ornately-carved shell disks, the photographs and drawings in Sun Circles and Human Hands present the archaeological record of the art and native crafts of the prehistoric southeastern Indians. Painstakingly compiled in the 1950s by two sisters who traveled the eastern United States interviewing archaeologists and collectors and visiting the major repositories, Sun Circles and Human Hands is remarkable for its breadth of illustration of Indian-made artifacts and its comprehensive documentation. Although research over the last 50 years has disproven many of the early theories reported in the text--which were not the editors' theories but those of the archaeologists of the day--the excellent illustrations of objects no longer available for examination have more than validated the lasting worth of this popular book. Broadly acclaimed when it first appeared, this new printing has the added value of Knight's foreword, which places the work in its proper context. Useful to museums, state and national parks, school libraries, gift stores, archaeological agencies, and private collections, Sun Circles and Human Hands is a rich pictorial survey accessible to anyone interested in early American Indian culture.… (more)