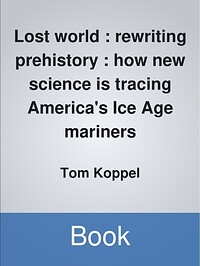 For decades the issue seemed moot. The first settlers, we were told, were big-game hunters who arrived from Asia at the end of the Ice Age some 12,000 years ago, crossing a land bridge at the Bering Strait and migrating south through an ice-free passage between two great glaciers blanketing the continent. But after years of sifting through data from diverse and surprising sources, the maverick scientists whose stories Lost World follows have found evidence to overthrow the "big-game hunter" scenario and reach a new and startling and controversial conclusion: The first people to arrive in North America did not come overland -- they came along the coast by water. In this groundbreaking book, award-winning journalist Tom Koppel details these provocative discoveries as he accompanies the archaeologists, geologists, biologists, and paleontologists on their intensive search. Lost World takes readers under the sea, into caves, and out to the remote offshore islands of Alaska, British Columbia, and California to present detailed and growing evidence for ancient coastal migration. By accompanying the key scientists on their intensive investigations, Koppel brings to life the quest for that Holy Grail of New World prehistory: the first peopling of the Americas.… (more)

Bones : discovering the first Americans by Elaine Dewar
First peoples in a new world : colonizing ice age America by David J. Meltzer
The great journey : the peopling of ancient America by Brian M. Fagan
Bones, boats & bison : archeology and the first colonization of western North America by E. James Dixon
Quest for the origins of the first Americans by E. James Dixon
30 more
After the Ice Age : the return of life to glaciated North America by E. C. Pielou, 1924-
In search of the Neanderthals : solving the puzzle of human origins by Chris Stringer
The Lost Civilizations of the Stone Age by Richard Rudgley
Ancient encounters : Kennewick Man and the first Americans by James C. Chatters
In search of Ice Age Americans by Kenneth B. Tankersley
The farfarers : before the Norse by Farley Mowat
Koster : Americans in search of their prehistoric past by Stuart Struever
The first Americans : in pursuit of archaeology's greatest mystery by J. M. Adovasio
Making Native American Hunting, Fighting, and Survival Tools: The Complete Guide to Making and Using Traditional Tools by Monte Burch
The mound builders by Robert Silverberg
Lost cities of the ancient Southeast by Mallory McCane O'Connor
Making silent stones speak : human evolution and the dawn of technology by Kathy Diane Schick
Megaliths and their mysteries : a guide to the standing stones of Europe by Alastair Service
Hidden cities : the discovery and loss of ancient North American civilization by Roger G. Kennedy
Early man in the New World. by Kenneth Macgowan, 1888-1963
Long before Columbus : how the ancients discovered America by Hans Holzer
Humankind emerging by Bernard Grant Campbell
The first Americans : the Pleistocene colonization of the New World
Back of history; the story of our own origins. by W. W. (William White) Howells, 1908-2005
The roots of civilization; the cognitive beginnings of man's first art, symbol, and notation. by Alexander. Marshack
Across Atlantic ice : the origin of America's Clovis culture by Dennis J. Stanford
Before civilization: the radiocarbon revolution and prehistoric Europe by Colin Renfrew
Hawaiian petroglyphs by J. Halley Cox
America B.C. : ancient settlers in the New World by Barry Fell
Ancient North America : the archaeology of a continent by Brian M. Fagan
In search of Adam; the story of man's quest for the truth about his earliest ancestors. by Herbert Wendt, 1914-
Petroglyphs of Hawaii by L. R. McBride
Canadian Arctic prehistory by Robert McGhee
The Last Lost World: Ice Ages, Human Origins, and the Invention of the Pleistocene by Lydia V. Pyne
The Neandertal enigma : solving the mystery of modern human origins by James Shreeve
Fewer