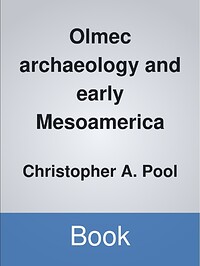 by Christopher A. Pool

Between 1500 and 500 BC the Olmecs flourished in the tropical lowlands of Mexico's Gulf Coast, creating the most complex of Mesoamerica's early societies and its first monumental art. Emphasising the strategies of political leaders and the environmental and social diversity within the Olmec region, this up-to-date and comprehensive study describes the history of Olmec research, synthesises recent scholarship on the ecology, economy, socio-political organisation and ideology of Olmec society, and evaluates current debates over the influence of the Olmecs on their contemporaries and their contributions to later Mesoamerican civilisations.

Chronicle of the Maya kings and queens : deciphering the dynasties of the ancient Maya by Simon Martin
The code of kings : the language of seven sacred Maya temples and tombs by Linda Schele
Mexico by Michael D. Coe
The Aztecs by Richard F. Townsend
The Sport of Life and Death: The Mesoamerican Ballgame by E. Michael Whittington
13 more
The art of Mesoamerica : from Olmec to Aztec by Mary Ellen Miller
A forest of kings : the untold story of the ancient Maya by Linda Schele
Prehistoric Mesoamerica by Richard E. W. Adams
Mesoamerica's ancient cities : aerial views of precolumbian ruins in Mexico, Guatemala, Belize, and Honduras by William M. Ferguson
The spectacle of the late Maya court : reflections on the murals of Bonampak by Mary Ellen Miller
The Maya by Michael D. Coe
The olmec world by Ignacio Bernal
Maya: Divine Kings of the Rain Forest by Nikolai Grube
The ancient Maya. by Sylvanus Griswold Morley, 1883-1948.
Scribes, warriors, and kings : the city of Copán and the ancient Maya by William Leonard Fash
Breaking the Maya code by Michael D. Coe
The world of the ancient Maya by John S. Henderson
Yaxchilan : the design of a Maya ceremonial city by Carolyn Elaine Tate
Fewer