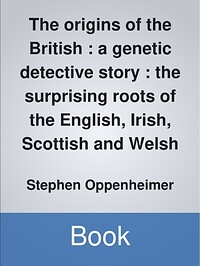 The origins of the British : a genetic detective story : the surprising roots of the English, Irish, Scottish and Welsh

Stephen Oppenheimer's extraordinary scientific detective story combining genetics, linguistics, archaeology and historical record shatters the myths we have come to live by. It demonstrates that the Anglo-Saxon invasions contributed just a tiny fraction (5%) to the English gene pool. Two thirds of the English people reveal an unbroken line of genetic descent from south-western Europeans arriving long before the first farmers. The bulk of the remaining third arrived between 7,000 and 3,000 years ago as part of long-term north-west European trade and immigration, especially from Scandinavia - and may have brought with them the earliest forms of English language. As for the Celts - the Irish, Scots and Welsh - history has traditionally placed their origins in Iron Age Central Europe. Oppenheimer's genetic synthesis shows them to have arrived via the Atlantic coastal route from Ice Age refuges including the Basque country; with the modern languages we call Celtic arriving later. There is indeed a deep divide between the English and the rest of the British. But as this book reveals the division is many thousands of years older than previously thought.… (more)

LibraryThing member priamel
1.5 stars is my code for 'I gave up'. I got as far as page 140 or so trying to ignore all the errors in linguistics, then 'sub-structural' for 'substratal' was just too much for me. The stuff on genetics may well be fine, and I didn't get far enough to encounter much history.
5 more
LibraryThing member mzaliwa
The genetic core of the book is completely unintelligible to me. He raises some very interesting questions about the existence of germanic speaking peoples in South East Britain prior to (and during) the Roman Occupation. He brings in some interesting linguistic, archaeological and historical
Show More
evidence in support of his theories; but this is pretty selective and I am not sure how careful he has been with it. He certainly can't be bothered to check how Tess Durbeyfield spelt her name.

I should like to see how he explains the accounts of the arrival of South Saxons under Aelle and his sons.

It's also annoying that he talks about England and Wessex &c. anachronistically. Still maybe GK Chesterton actually knew something when he wrote

"Before the Roman came to Rye or out to Severn strode,
The rolling English drunkard made the rolling English road."
Show Less
LibraryThing member tristram
A difficult, technical book, more so than Oppenheimer's 'Out of Eden', but still well worth the effort if you are interested in British prehistory. Genetic markers reveal where the people of Britain came from and when they came.
LibraryThing member fnielsen
Oppenheimer advances a theory of the origin of the british people based on analysis of genetics. His analysis bring him to say that most of the irish, welsh, scotish and english people arrived just after the ice age, and that celtic and saxons and angles were not a major invasion; celtics were not
Show More
from southern Germany and were never in England. If he is right quite a number of other books needs to be rewritten! Oppenheimer bases much of his argument on he own analysis of y-chromosome distribution across Europe. He seems to identify his own haplotypes - that are not described in detail. Furthermore he uses some kind of kernel density modeling where it is not apparent how much variation in the estimate there is.
Show Less
LibraryThing member Malarchy
The Origins of the British still make for contentious and fascinating debate amongst the people of these isles and this work adds strongly to the discussion. The purpose of the book appears to be to establish genetic analysis to the existing archaelogical and linguistic history built up over the
Show More
centuries. Genetics is clearly still in it's infancy but it is a massive step forward in understanding the past.

Oppenheimer's work lays out the genetic influences of the British population (excluding post-WWII immigration) and his findings are well worth knowing. The genetic analysis sets out the post-Ice Age colonisation phases and the most significant plus points of the book are the genetic debunking of wipeout theories and the co-existance of Germanic, Scandinavian, and Celtic peoples in Britain.

The spread of western European peoples from Ice Age refuges and the development of culture and language inevitably means that the peoples of those countries are somewhat similar. What Oppenheimer's analysis of the genetic research shows is that there are observable differences and that those differences can trace a history of Britain that has had far less intrusion from overseas than is typically suggested.

There are two issues that I have with the book - the writing is not of the highest quality and the genetics themselves are not well explained. The writing does not flow and is tough going, I did feel as though I was reading a dissertation at times and not an especially well written one. This is not really popular science and the logical chain is not easy to follow as Oppenheimer leaps into asides and tangents.

I really do though wish that the genetics had been better and more fully exposed. Traditional history is interesting but hardly new. The movement of genes deserved a fuller treatment and there is not one point in Oppenheimer's work in which he lays out explicitly the genetic map of Britain.

Overall, this is the sort of book to read if you really do want to delve into some of the science and the emerging picture that genetics paints of north western Europe. It is not a light read and it raises more questions than it answers but the broad overview that the detail conjures is a great platform for better understanding who we British are.
Show Less
LibraryThing member ablueidol
Book argues that three entry sites into the UK after the last ice age. Founder populations in the west from Spain, south east, Germanic and north west from north east Europe set the pattern which other cultural/linguistic movements followed. But a tad over technical for a general book

And the
Show More
English language reflects the pre and Roman period German roots and not evidence of a Celtic ethnic cleansing.So you Celts are really escaped from Spain and were not driven out of England by the post Romans invasions...so there!
Show Less
Fewer

Ancestral journeys : the peopling of Europe from the first venturers to the Vikings by Jean Manco
Mapping human history : discovering the past through our genes by Steve Olson
DNA USA : a genetic portrait of America by Bryan Sykes
After the Ice: A Global Human History 20,000-5000 BC by Steven Mithen
Prehistoric Britain by Timothy Darvill
1 more
Facing the ocean : the Atlantic and its peoples, 8000 BC-AD 1500 by Barry W. Cunliffe
Fewer