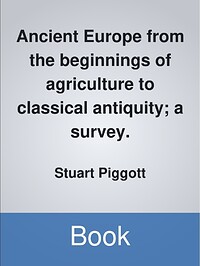 Ancient Europe from the beginnings of agriculture to classical antiquity; a survey.

This book interprets the main lines of European prehistory from the first agricultural communities in the sixth or even seventh millennium B.C. until the incorporation of much of barbarian Europe within the Roman Empire. It traces the beginnings of animal domestication and plant cultivation in ancient Western Asia, and the transmission of these skills by movements of peoples or by assimilation, in the European continent. The early technology of working in copper, and later in bronze, is discussed. Metal winning and working, and trade in raw materials and finished products, brought social and political repercussions to barbarian and civilised peoples alike.The spread of the Indo-European languages is considered in its archaeological context, as is the formation of the Celtic peoples, soon to acquire iron technology and to become the main barbarian component in Europe, side-by-side with the civilised Mediterranean societies, Greek, Etruscan or Roman. The later Celtic world of Europe and the British Isles is examined, and an attempt made to estimate the contribution of the older barbarian world to the Europe, which emerged from the ruins of the Roman Empire, geographically, the book ranges over the whole European field, from the Atlantic shores to the Urals and the Caucasus. While it does not pretend to be a prehistory of Europe within the period chosen, the book does bring together and discuss for the first time much scattered and often little-known archaeological evidence.This book is organized in a manner that will permit it being read on two levels. For the general non-specialist reader, the text and illustrations should give a sufficient idea of the nature of the theme and of the evidence, and of the development of the barbarian cultures side-by-side with the civilizations of antiquity, as their precursors and their subsequent counterparts. For the archaeological student however the text is documented with rather full references and notes at the end of each chapter, and a select bibliography, which should facilitate access to the original sources.… (more)

Before civilization: the radiocarbon revolution and prehistoric Europe by Colin Renfrew
The civilization of the goddess by Marija Alseikaitė Gimbutas
Ancestral journeys : the peopling of Europe from the first venturers to the Vikings by Jean Manco
Prehistoric societies by Grahame Clark, 1907-
World prehistory: a new outline by Grahame Clark
18 more
British prehistory: A new outline by Colin Renfrew
The dawn of European civilization. by V. Gordon Childe, (Vere Gordon), 1892-1957
The goddesses and gods of Old Europe, 6500-3500 BC, myths and cult images by Marija Alseikaitė Gimbutas
The bog people : Iron-Age man preserved by P. V. Glob
Europe before Rome : a site-by-site tour of the stone, bronze, and iron ages by T. Douglas Price
Facing the ocean : the Atlantic and its peoples, 8000 BC-AD 1500 by Barry W. Cunliffe
The Greek stones speak; the story of archaeology in Greek lands. by Paul Lachlan MacKendrick, 1914-1998
The Vikings. by Johannes Brondsted, 1890-1965.
Looking for Dilmun. by Geoffrey Bibby
The bull of Minos. by Leonard Cottrell
Prehistoric Britain by Jacquetta (Hopkins) 1910- Hawkes
Narrow pass, black mountain; the discovery of the Hittite Empire, by C. W. Ceram, 1915-1972.
Prehistoric European art. by Walter. Torbrugge
People of the earth : an introduction to world prehistory by Brian M. Fagan
Prehistoric Avebury by Aubrey Burl
The historical atlas of the Celtic world by John Haywood, 1956-
Egypt before the pharaohs : the prehistoric foundations of Egyptian civilization by Michael A. Hoffman, 1944-
Dawn of the Gods by Jacquetta Hawkes
Fewer