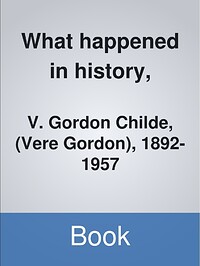 What happened in history,

LibraryThing member name99
A better than expected history from the stone age to the Roman Empire.

This was written in 1954, so can obviously be forgiven for omitting vast amounts of material; in particular this is very much the western canon view of the world --- no Africa, Australia or Americas, and very very little India or China.

What I found especially interesting was a concentration towards the end of the book on the class structure and the economy (especially the failings of said economy) in bronze and iron age times.
The fact that I've not seen this covered much in modern texts makes me wonder whether it was a fanciful construction of the Marxist-inspired times, something we are now wise enough to realize we cannot speculate about, or whether the fashion operates in the reverse, that it is our times that refuse to acknowledge and discuss what is clearly obvious.
Certainly this is an issue I'd like to know more about.… (more)
1 more
LibraryThing member antiquary
I understand Childe was resopected in his time but is now rather obsolete.
Fewer

World prehistory: a new outline by Grahame Clark
Before civilization: the radiocarbon revolution and prehistoric Europe by Colin Renfrew
Ancient Europe from the beginnings of agriculture to classical antiquity; a survey. by Stuart Piggott
The atlas of early man by Jacquetta Hopkins Hawkes, 1910-
Ancestral journeys : the peopling of Europe from the first venturers to the Vikings by Jean Manco
21 more
Prehistoric Britain by Jacquetta (Hopkins) 1910- Hawkes
Before philosophy, the intellectual adventure of ancient man; an essay on speculative thought in the ancient Near East, by Henri Frankfort, 1897-1954
The birth of civilization in the Near East. by Henri Frankfort, 1897-1954
The Hittites. by O. R. (Oliver Robert) Gurney, 1911-
Prehistoric societies by Grahame Clark, 1907-
Digging up the past by Charles Leonard Woolley, 1880-
Prehistoric India, to 1000 B.C. by Stuart Piggott
The dawn of European civilization. by V. Gordon Childe, (Vere Gordon), 1892-1957
The Greeks. by H. D. F. (Humphrey Davy Findley) Kitto
The prehistory of East Africa. by Sonia Mary. Cole
Archaeology from the earth. by Robert Eric Mortimer Wheeler, Sir, 1890-
World prehistory : a brief introduction by Brian M. Fagan
Everyday life in prehistoric times, by Marjorie Quennell
History begins at Sumer. by Samuel Noah Kramer, 1897-1990
Aspects of antiquity; discoveries and controversies, by M. I. (Moses I.) Finley, 1912-1986
Facing the ocean : the Atlantic and its peoples, 8000 BC-AD 1500 by Barry W. Cunliffe
Ascent to civilization : the archaeology of early man by John Gowlett
Ur of the Chaldees; a record of seven years of excavation, by Charles Leonard Woolley, Sir 1880-1960.
People of the earth : an introduction to world prehistory by Brian M. Fagan
The Lost Civilizations of the Stone Age by Richard Rudgley
The Celts by Nora K. (Nora Kershaw) Chadwick, 1891-1972
Fewer