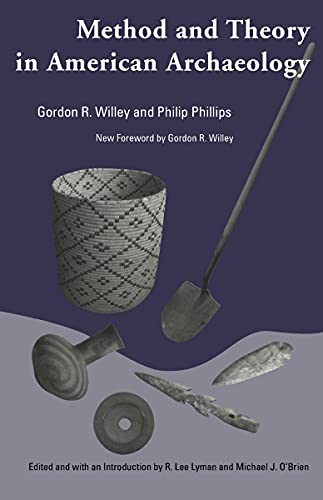 A Dan Josselyn Memorial Publication This invaluable classic provides the framework for the development of American archaeology during the last half of the 20th century. In 1958 Gordon R. Willey and Philip Phillips first published Method and Theory in American Archaeology?a volume that went through five printings, the last in 1967 at the height of what became known as the new, or processual, archaeology. The advent of processual archaeology, according to Willey and Phillips, represented a "theoretical debate . . . a question of whether archaeology should be the study of cultural history or the study of cultural process." Willey and Phillips suggested that little interpretation had taken place in American archaeology, and their book offered an analytical perspective; the methods they described and the structural framework they used for synthesizing American prehistory were all geared toward interpretation. Method and Theory served as the catalyst and primary reader on the topic for over a decade. This facsimile reprint edition of the original University of Chicago Press volume includes a new foreword by Gordon R. Willey, which outlines the state of American archaeology at the time of the original publication, and a new introduction by the editors to place the book in historical context. The bibliography is exhaustive. Academic libraries, students, professionals, and knowledgeable amateurs will welcome this new edition of a standard-maker among texts on American archaeology.    … (more)

A history of American archaeology by Gordon Randolph Willey, 1913-
Early man in the New World. by Kenneth Macgowan, 1888-1963
Ancient North America : the archaeology of a continent by Brian M. Fagan
Invitation to archaeology. With illus. by Eric G. Engstrom. by James Deetz
The first Americans : in pursuit of archaeology's greatest mystery by J. M. Adovasio
11 more
Historical archaeology by Ivor Noël Hume
Field methods in archaeology by Thomas R. Hester
Archaeology : theories, methods, and practice by Colin Renfrew
Prehistoric man in the New World. by Rice University.
An introduction to prehistoric archeology by Frank Hole
South America (Introduction to American Archaeology, Vol. 2) by Gordon R. Willey
Prehistory of the Americas by Stuart J. Fiedel
Contemporary archaeology; a guide to theory and contributions by Mark P. Leone
New world prehistory; archaeology of the American Indian by William T. Sanders
Death by theory : a tale of mystery and archaeological theory by Adrian Praetzellis, 1952-
Atlas for anthropology by Robert F. Spencer
Fewer