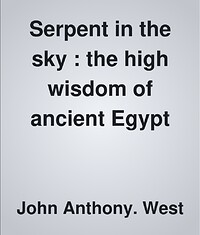 Serpent in the sky : the high wisdom of ancient Egypt

John Anthony West's revolutionary reinterpretation of the civilization of Egypt challenges all that has been accepted as dogma concerning Ancient Egypt. In this pioneering study West documents that: Hieroglyphs carry hermetic messages that convey the subtler realities of the Sacred Science of the Pharaohs. Egyptian science, medicine, mathematics, and astronomy were more sophisticated than most modern Egyptologists acknowledge. Egyptian knowledge of the universe was a legacy from a highly sophisticated civilization that flourished thousands of years ago. The great Sphinx represents geological proof that such a civilization existed. This revised edition includes a new introduction linking Egyptian spiritual science with the perennial wisdom tradition and an appendix updating West's work in redating the Sphinx. Illustrated with over 140 photographs and line drawings.… (more)

LibraryThing member drj
Dr. West makes many presumptions in his account of Ancient Egyptian spirituality and secret or sacred traditions. These ideas come from his own interpretation of myth and symbols used in tombs and temples and also from the work of Schwaller de Lubicz who made a study of the geometric ratios found in the temple architecture that he likened to the image of the sacred man or pharaoh.… (more)

The Magic of Obelisks by Peter Tompkins
The Message of the Sphinx: A Quest for the Hidden Legacy of Mankind by Graham Hancock
Maps of the ancient sea kings; evidence of advanced civilization in the ice age. by Charles H. Hapgood
The Giza Power Plant : Technologies of Ancient Egypt by Christopher Dunn
Secrets of the Great Pyramid by Tompkins, Peter(December 31, 1978) Hardcover
10 more
Fingerprints Of The Gods: The Evidence of Earth's Lost Civilization by Graham Hancock
The Priests of Ancient Egypt by Serge Sauneron
Voices of the rocks : a scientist looks at catastrophes and ancient civilizations by Robert M. Schoch
Heaven's mirror : quest for the lost civilization by Graham Hancock
The path of the Pole by Charles H. Hapgood
The Temples of Karnak by R. A. Schwaller de Lubicz
Myth and Symbol in Ancient Egypt by Robert Thomas Rundle Clark
Beneath the pyramids : Egypt's greatest secret uncovered by Andrew Collins, 1957-
The Sirius Mystery: New Scientific Evidence of Alien Contact 5,000 Years Ago by Robert Temple
The cycle of cosmic catastrophes : flood, fire, and famine in the history of civilization by Richard B. Firestone
Fewer