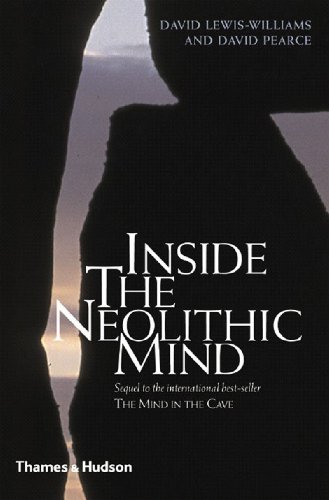 Inside the Neolithic Mind: Consciousness, Cosmos, and the Realm of the Gods

What do the headless figures found in the famous paintings at Catalhoyuk in Turkey have in common with the monumental tombs at Newgrange and Knowth in Ireland? How can the concepts of "birth," "death," and "wild" cast light on the archaeological enigma of the domestication of cattle? What generated the revolutionary social change that ended the Upper Palaeolithic?David Lewis-Williams's previous book, The Mind in the Cave, dealt with the remarkable Upper Palaeolithic paintings, carvings, and engravings of western Europe. Here Dr. Lewis-Williams and David Pearce examine the intricate web of belief, myth, and society in the succeeding Neolithic period, arguably the most significant turning point in all human history, when agriculture became a way of life and the fractious society that we know today was born.The authors focus on two contrasting times and places: the beginnings in the Near East, with its mud-brick and stone houses each piled on top of the ruins of another, and western Europe, with its massive stone monuments more ancient than the Egyptian pyramids.They argue that neurological patterns hardwired into the brain help explain the art and society that Neolithic people produced. Drawing on the latest research, the authors skillfully link material on human consciousness, imagery, and religious concepts to propose provocative new theories about the causes of an ancient revolution in cosmology and the origins of social complexity. In doing so they create a fascinating neurological bridge to the mysterious thought-lives of the past and reveal the essence of a momentous period in human history. 100 illustrations, 20 in color.… (more)

LibraryThing member ddailey
The authors take a multi-disciplinary approach to interpreting neolithic sites and artifacts. With little foundation in neurobiology, ethnography or archeaology, I was just along for the ride on this book. No idea where this book fits into the cannon of the research it draws on, but I found their thesis provocative and worth the read.… (more)
2 more
LibraryThing member echaika
Another brilliant book by the author of the brilliant book The Mind in the Cave. Williams and Pearce, by in-depth examination of the art of hunter-gatherers, usually in situ, show what the artists believed and how they viewed the cosmos. It is a history of human thought and consciousness, as well as early religions.

Beautiful full-color pictures of the art they are analyzing grace this volume.

Although this is a scholarly work of very high caliber, it is written in an interesting and flowing style.… (more)
LibraryThing member Lukerik
A hard turd forced out by two vein-faced bigots. One straining, the other pressing down on his gut. It purports to apply the findings of neuroscience to the archaeological remains of the Neolithic. In reality it claims religion to be the result of hallucinations and they propose in it’s place a religion of their own devising called Science. The book is marred by boasting, pride and arrogance. They make grandiose claims about how their thinking is much better than anyone else’s. Yet their reasoning is fundamentally flawed.

Take pages 78-9. They criticise the ‘functionalist’ explanation of ritual pig slaughter in Pacific societies, that it is to regulate the pig population. They call this a tautology and descriptive rather than explanatory: “The function of x is to do what it does”. They claim to be breaking out of the tautology by explaining that serial burials in the Near East were done to help the dead. Can’t they see that their explanation is just as functional? Their problem is that in their materialistic conception of the world slaughtering pigs controls their numbers, but the dead don’t need to be helped. If you think the dead need to be helped then doing something for them is just as functional. They say that helping the dead was done for mythological reasons. Maybe they had myths about how the dead would come back and get them if they weren’t serially buried. Maybe the Pacific societies had stories about what the pigs would do if there were too many of them. The problem is that the authors’ religious beliefs are intruding into the argument. They believe that too many pigs is a problem but they’re not afraid of ghosts.

Look, I believe in the Big Bang. I believe that it’s an event that has actually happened. I could tell you a story about how it happened. That story would be a myth, an attempt to explain in narrative some fundamental truth about the universe that explains the way it is. I could tell you the same story using a more precise language like mathematics. It would still be a myth. Just because it’s a myth doesn’t mean it isn’t true.

How can two people lacking even a basic self awareness hope to start their own religion? Or are they aware that their arguments are faulty? Do they have so little respect for the reader that they think we won’t notice? Is this a scam?

I’m particularly angry because the book claims to be about the Neolithic. I wanted to read a book about that. If I’d wanted the nasty views of two horrible bigots I’d have logged on to Twitter.… (more)
Fewer

The mind in the cave : consciousness and the origins of art by J. David Lewis-Williams
After the Ice: A Global Human History 20,000-5000 BC by Steven Mithen
The significance of monuments : on the shaping of human experience in Neolithic and Bronze Age Europe by Richard Bradley, 1946-
The man in the ice : the discovery of a 5,000-year-old body reveals the secrets of the stone age by Konrad Spindler, 1939-
The leopard's tale : revealing the mysteries of Çatalhöyük by Ian Hodder
18 more
Prehistoric Avebury by Aubrey Burl
The Lost Civilizations of the Stone Age by Richard Rudgley
A guide to the Stone Circles of Britain, Ireland, and Brittany by Aubrey Burl
Before civilization: the radiocarbon revolution and prehistoric Europe by Colin Renfrew
The shamans of prehistory : trance and magic in the painted caves by Jean Clottes
The horse, the wheel, and language : how Bronze-Age riders from the Eurasian steppes shaped the modern world by David W. Anthony
Ancestral journeys : the peopling of Europe from the first venturers to the Vikings by Jean Manco
The goddesses and gods of Old Europe, 6500-3500 BC, myths and cult images by Marija Alseikaitė Gimbutas
Making silent stones speak : human evolution and the dawn of technology by Kathy Diane Schick
An archaeology of natural places by Richard Bradley, 1946-
The cave painters : probing the mysteries of the world's first artists by Gregory Curtis, 1944-
How ancient Europeans saw the world : vision, patterns, and the shaping of the mind in prehistoric times by Peter S. Wells
Deciphering ancient minds : the mystery of San Bushman rock art by J. David Lewis-Williams
The language of the goddess : unearthing the hidden symbols of western civilization by Marija Alseikaitė Gimbutas
In search of the Neanderthals : solving the puzzle of human origins by Chris Stringer
Introduction to rock art research by David S. Whitley
In search of the Indo-Europeans : language, archaeology, and myth by J. P. Mallory
Prehistoric Art: The Symbolic Journey of Humankind by Randall White
Fewer