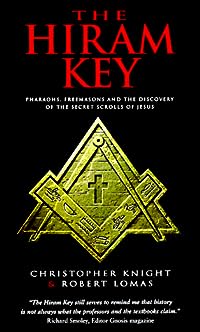 The Hiram Key: Pharaohs, Freemasons and the Discovery of the Secret Scrolls of Jesus

Was Jesus a Freemason? The discovery of evidence of the most secret rites of Freemasonry in an ancient Egyptian tomb led authors Chris Knight and Bob Lomas into and extraordinary investigation of 4, 000 years of history. This astonishing bestseller raises questions that have challenged some of Western civilisation's most cherished beliefs- Were scrolls bearing the secret teachings of Jesus buried beneath Herod's Temple shortly before the destruction of Jerusalem by the Roman's? Did the Knights Templar, the forerunners of modern Freemasonry, excavate these scrolls in the twelfth century? And were these scrolls subsequently buried underneath a reconstruction of Herod's Temple, Rosslyn Chapel in Scotland - where they are now awaiting excavation? The authors' discoveries shed a new light on Masonic ceremony and overturn out understanding of history.… (more)

LibraryThing member paradoxosalpha
This book has been the source of some heat, if little light, among students of esoteric history.

The scholarship in The Hiram Key is not profound, and it compares poorly with other books that treat similar themes and topics, such as Robertson's Born in Blood or Assmann's Moses the Egyptian. It is
Show More
certainly wide-ranging, and seems to incorporate a dozen other recent theories on the Shroud of Turin, Templar survival in Scotland, Egyptian elements in Hebrew religion, lost Christian scriptures, and Masonic origins.

The picture of Gnosticism presented by Knight and Lomax is a caricature. Their theories of Egyptian origins for Masonry are in many cases laughable, such as using the ancient Egyptian doctrine of Ma'at (denoting both physical/architectural and metaphysical/moral order) as proof that the central metaphors of Masonry must descend directly from Egypt.

Perhaps the most novel and interesting material in the book concerns the authors' readings of Hebrew scripture, and their theories of Hebrew custody of "the Sequenere resurrection ritual." Fortunately for serious students who may become impatient with the irritating journalistic style of the book, each chapter has a single-page "Conclusion" which can substitute as a summary for the chapter as a whole. I recommend reading the "Conclusions," and only going back to the actual details of the chapter for those that strike a personal interest.

The authors state in their first chapter that they "are very aware that the information which [they] give here may be considered by some Masons a betrayal of those secrets" which they have sworn to conceal. In fact, they give very detailed accounts of the Craft ceremonies as they received them in English lodges. We are expected to forgive them these willful exposures and violations of their oaths for two reasons:

2. The authors took their obligations on the condition that "they would not interfere with [their] freedom as moral, civil or religious agents," and they claim that to maintain secrecy on the matters discussed in the book would violate that condition.

Having read the book, I can find nothing in it which would create a moral, civil, or religious imperative for ritual exposure. The action agenda to which the authors' thesis builds, is to excavate under Rosslyn Chapel in search of early Christian MSS. The real imperative for the authors must surely have been the prospect of making some money off of a book to be sold to the general public. That being so, I recommend that Masons interested in the book check it out of a public library or buy a used copy, in order to avoid contributing to the royalty stream for the authors.
Show Less
9 more
LibraryThing member NielsenGW
Christopher Knight’s and Robert Lomas’s The Hiram Key is a laughable “history” of secret societies, the Freemasons, Judeo-Christian historical figures, and Egyptian Gnosticism. Therein lies the problem with writing about secret societies. Not much can either be proven or disproven. Their
Show More
very clandestine nature requires that they do not leave a lot of historical documentation in their wake. Lomas and Knight try unflaggingly to connect small clues in artifacts and letters together to illustrate an alternate reading of history. They include the classic story of Jesus’s hidden family and the Rosslyn Chapel conspiracy along with evidence of an Egyptian influence on Judaism and the existence of secret scrolls that tell the true story of Freemasonry.

This book is laced with conspiracies, conjecture, and confusion. Luckily, each chapter has a handy-dandy conclusion section that you can skip to when you get too overwhelmed by the writers’ avalanche of secret knowledge. The whole book is basically a call to arms to dig up a church so that they can “prove” some of the more outlandish theories that they propose. There is little here by way of a bibliography or even footnotes, so tracing their scholarship is nearly impossible. You just have to sit back and enjoy the ride they take you on. And trust me: it is quite a wild ride.
Show Less
LibraryThing member boniface
The theory put forward in this book rests on a very important linchpin, as they state here: "One of the strangest and yet most important in our reconstruction of the Babylonian exile was the prophet Ezekiel... Ezekiel was the architect of the imaginary or idealised Temple of Yahweh, and we would
Show More
argue that it was the most important of them all!"

However, most scholars disagree with them as they state, "Many twentieth-century experts have concluded that these works were the output of several much later people, circa 230 BC onwards. This would place it close to the dating as the oldest 'Dead Sea Scrolls' found at Qumran, thought to date from around 187 BC to AD 70."

If this were true, then it would totally screw up their theory. How do they respond? Like this, "If this is the case it would affect our thesis, serving only to confirm the already massive links between these writings and the Qumran Community, so FOR CONVENIENCE WE ASSUME at this stage that the Book of Ezekiel was indeed written by one man whilst in captivity in Babylon." (Caps are mine for emphasis.) In other words, "since most scholars have demonstrated facts that don't jive with our theory, we're just going to ignore them." What this all means to me, is that this book is utter garbage!

What I have quoted from the 'The Hiram Key' can be found on page 176.
Show Less
LibraryThing member Munchausen
Nothing is hidden that will not made known, or secret that will not come to light.
LibraryThing member drj
This book reads like a detective novel. The Library of Congress has cataloged it under Freemasons - history, so it is taken seriously. This book, along with "The Passover Plot" and "Holy Blood, Holy Grail" are carefully researched but written in the vernacular of the adventure novel, as if it were
Show More
a real live Indiana Jones. Having seen the mummy in question in other publications, I do realize it is unusual, but do not place upon it the same significance as the authors do. What with modern archaeological methods, one day this may be possible. The bottom line is that the book is an entertaining read and challenges current orthodox history.
Show Less
LibraryThing member w_ynelle
great book on the history of the Freemasons. It has some really thought provoking theories.
LibraryThing member J_Harshaw
I read this years ago, before Dan Brown and the Davinci Code phenom. I was shocked that the authors of this book lost the plagiarism lawsuite against Dan Brown. Seemed to me that Brown stole everything from this book.

I need to revisit this book. There was a lot to like about it, though as I recall,
Show More
there were also some points that were hard to accept.
Show Less
LibraryThing member TheGalaxyGirl
I love ideas that involve thinking outside the box. Ergo, I have a soft spot for alternative history, especially that involving religion, secret societies, and events beyond the canon of history we are taught in school.

Therefore, I found this book to be an interesting and plausible account of the
Show More
history and origins of Freemasonry. However, there is very little in the way of serious scholarship here -- no citing of sources, no bibliography, and some of the leaps they take and the connections they make are giant steps indeed.

So, the book is entertaining, plausible as far as it goes, but unless some further discovery is made, still extremely speculative.
Show Less
LibraryThing member MiaCulpa
I came to "Hiram Key" thinking "this will be a particularly woolly conspiracy theory" and I was dead-on right. To the best of my understanding the thesis is that Freemasonry comes from ancient Egypt rather than eighteenth century Britain, and that Jesus was a Freemason (and had a wife and kid) and
Show More
that pretty much every shadowy organisation in history gets a mention (including the Priory of Sion and the Cathars). Somehow Rosslyn Chapel and the Dead Sea Scrolls also get shout outs.

There's some entertainment to be had in "Hiram Key" but to be honest Knight didn't sway my beliefs around the Freemasons.
Show Less
LibraryThing member williemeikle
Christopher Knight and Robert Lomas, both Masons, set out to find the origins of Freemasonry and ended up at Rosslyn.

An interesting study of the history of Freemasonry, but they allow their speculations to get more than a bit wild.

Nice pictures of the inside of the chapel though.
Fewer

Holy Blood, Holy Grail: The Secret History of Christ & The Shocking Legacy of the Grail by Michael Baigent
The Sign and the Seal: The Quest for the Lost Ark of the Covenant by Graham Hancock
Uriel's Machine: Uncovering the Secrets of Stonehenge, Noah's Flood and the Dawn of Civilization by Christopher Knight
A new encyclopaedia of Freemasonry (Ars magna latomorum) and of cognate instituted mysteries : their rites, literature, and history by Arthur Edward Waite, 1857-1942
Fingerprints Of The Gods: The Evidence of Earth's Lost Civilization by Graham Hancock
1 more
The gnostic gospels by Elaine H. Pagels, 1943-
Fewer