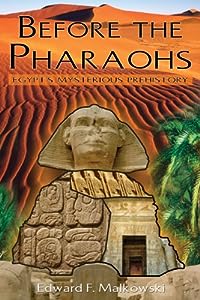 Before the Pharaohs: Egypt's Mysterious Prehistory

Presents conclusive evidence that ancient Egypt was originally the remnant of an earlier, highly sophisticated civilization * Supports earlier speculations based on myth and esoteric sources with scientific proof from the fields of genetics, engineering, and geology * Provides further proof of the connection between the Mayans and ancient Egyptians * Links the mystery of Cro-Magnon man to the rise and fall of this ancient civilization In the late nineteenth century, French explorer Augustus Le Plongeon, after years of research in Mexico's Yucatán Peninsula, concluded that the Mayan and Egyptian civilizations were related--as remnants of a once greater and highly sophisticated culture. The discoveries of modern researchers over the last two decades now support this once derided speculation with evidence revealing that the Sphinx is thousands of years older than Egyptologists have claimed, that the pyramids were not tombs but geomechanical power plants, and that the megaliths of the Nabta Playa reveal complex astronomical star maps that existed 4,000 years before conventional historians deemed such knowledge possible. Much of the past support for prehistoric civilization has relied on esoteric traditions and mythic narrative. Using hard scientific evidence from the fields of archaeology, genetics, engineering, and geology, as well as sacred and religious texts, Malkowski shows that these mythic narratives are based on actual events and that a highly sophisticated civilization did once exist prior to those of Egypt and Sumer. Tying its cataclysmic fall to the mysterious disappearance of Cro-Magnon culture, Before the Pharaohs offers a compelling new view of humanity's past.… (more)

Civilization one : the world is not as you thought it was by Christopher Knight, 1950-
The Egypt Code by Robert Bauval
The Sphinx mystery : the forgotten origins of the sanctuary of Anubis by Robert K. G. Temple
Lost technologies of ancient Egypt : advanced engineering in the temples of the pharaohs by Christopher Dunn, 1946-
The Atlantis Blueprint: Unlocking the Ancient Mysteries of a Long-Lost Civilization by Colin Wilson
20 more
Sacred Symbols of the Dogon: The Key to Advanced Science in the Ancient Egyptian Hieroglyphs by Laird Scranton
Earth under fire : humanity's survival of the Ice Age by Paul A. LaViolette
The Templars and the Ark of the Covenant : the discovery of the treasure of Solomon by Graham Phillips
The Science of the Dogon: Decoding the African Mystery Tradition by Laird Scranton
The Templar meridians : the secret mapping of the New World by William F. Mann
The Cygnus mystery : unlocking the ancient secret of life's origins in the cosmos by Andrew Collins, 1957-
Ancient Egypt 39,000 BCE: The History, Technology, and Philosophy of Civilization X by Edward F. Malkowski
The Message of the Sphinx: A Quest for the Hidden Legacy of Mankind by Graham Hancock
Oedipus and Akhnaton: myth and history. by Immanuel Velikovsky, 1895-1979
Forgotten civilization : the role of solar outbursts in our past and future by Robert M. Schoch
Advanced Civilizations of Prehistoric America: The Lost Kingdoms of the Adena, Hopewell, Mississippians, and Anasazi by Frank Joseph
Discovering the Mysteries of Ancient America: Lost History and Legends, Unearthed and Explored by Frank Joseph
Voices of the rocks : a scientist looks at catastrophes and ancient civilizations by Robert M. Schoch
Beneath the pyramids : Egypt's greatest secret uncovered by Andrew Collins, 1957-
The Giza Power Plant : Technologies of Ancient Egypt by Christopher Dunn
The Hiram Key: Pharaohs, Freemasons and the Discovery of the Secret Scrolls of Jesus by Christopher Knight
The path of the Pole by Charles H. Hapgood
Technology of the Gods: The Incredible Sciences of the Ancients by David Hatcher Childress
Voyages of the Pyramid Builders: The True Origins of the Pyramids from Lost Egypt to Ancient America by Robert M. Schoch
The lost civilization enigma : a new inquiry into the existence of ancient cities, cultures, and peoples who pre-date recorded history by Philip Coppens
Fewer