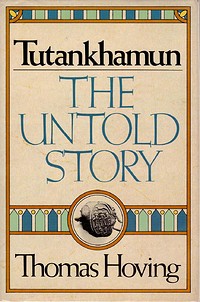 The discovery of Tutankhamun's treasure-filled tomb is one of the greatest events in modern archeology. It is also a story so filled with intrigues, accusations, international imbroglios, and lasting scandals that it forever altered the way archaeological expeditions were organized and conducted. Hoving's Tutankhamun focuses on Howard Carter, the archaeologist who persisted for six years in his search in the Valley of the Kings for Tutankhamun's tomb. Other major figures in the discovery include: Carter's patron Lord Carnarvon, who died shortly after entering the tomb, thus kindling rumors of a curse; Carter's rival Pierre Lacau, a French Jesuit who headed the Antiquities Service in Cairo and did everything he could to ruin Carter and deny his claim; the Egyptian authorities determined to keep the artifacts of their national heritage in their country; and Arthur Weigall and other Egyptologists who felt slighted by Carter's refusal to admit experts anywhere near his discovery.… (more)

LibraryThing member MsMixte
Probably the most readable book on Tutankhamun! Hoving never lets one's interest flag. Very enjoyable (and informative, the perfect combination).
1 more
LibraryThing member Pieter_Goldhoorn
This boek is about the conflict between Howard Carter and the authorities in Egypt, not about Tutankhamun. That makes it not so interesting. Unfortunately it also gives a black and white picture of Howard Carter. I do not recommend this book to people who like to know more about Tutankhamun. Only
Show More
if you have already everything about the discovery of the grave of Tutankhamun and the life of Howard Carter, it may present the last pieces of the puzzle.
Show Less
Fewer

Valley of the Kings: Exploring the Tombs of the Pharaoh by John Romer
Tutankhamen: Anenesim, Atenism and Egyptian Monotheism by Ernest A Wallis Budge
Treasures of Tutankhamun by Katherine Stoddert Gilbert
The pyramids of Egypt by I. E. S. (Iorwerth Eiddon Stephen) Edwards, 1909-
Egypt before the pharaohs : the prehistoric foundations of Egyptian civilization by Michael A. Hoffman, 1944-
5 more
Temples, tombs, and hieroglyphs; the story of Egyptology. by Barbara Mertz
Secrets of the Great Pyramid by Tompkins, Peter(December 31, 1978) Hardcover
Mummies, Myth and Magic in Ancient Egypt by Christine El Mahdy
Atlas of Ancient Egypt (Cultural Atlas of) by John Baines
The riddle of the pyramids. by K. (Kurt) Mendelssohn, 1906-
Fewer