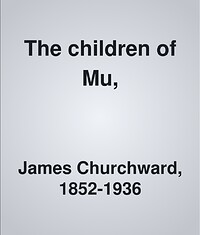 The children of Mu,

"The Land of Mu was a huge continent situated in the Pacific Ocean between America and Asia, its centre lying somewhat south of the equator. Basing its area on the remains which are still above water, it would have been about six thousand miles from north to south. All the rocky islands, individually and in groups, scattered over the Pacific Ocean were once a part of the Continent of Mu. Cataclysmic earthquakes destroyed Mu about twelve thousand years ago. The Pacific Ocean rushed in, making a watery grave for a vast civilization and sixty million people. Easter Island, Tahiti. Samoas, Cook, Marshall, Gilbert, Caroline, Marianas, Hawaii and the Marquesas are but the remnants of that great land, standing today as sentinels to a silent grave. he author spent fifty years authenticating and piecing together the story of the lost civilization of Mu. In this, his second book, Churchward tells the satory of the colonial expansion of Mu and the influence of the highly developed Mu culture on the rest of the world."… (more)

LibraryThing member JNagarya
We know this is true, ya see, because it happened at night, when it was dark, "before the dawn of history," before anyone was able (because it was dark), or even thought, to make an historical record of it. In addition, writing had yet to be invented, which wouldn't have been of much use because
Show More
pencils ddn't exist either. (Oh, yeah, I know -- you're gonna say that they had charcoal for their barbecues, so could have used that to write the history. No, they could not: it was dark, so they couldn't find the matches that had yet to be invented. Besides, if they had written the history, it would no longer be "before the dawn of history," so wouldn't be true.)

Anyway, to keep it simple, we know this is true history because it happened before there was history, so that's how we know it's true history . . . (Yes, it is pronounced like "moo," but it isn't spelled that way, because the cow didn't happen to be one of their gods, because they ate it.)
Show Less
1 more
LibraryThing member DinadansFriend
A bit of early anthropology, and misreading of Archaeology...and a reasonable living for a deluded man....And it is still to be had....
Fewer

The sacred symbols of Mu by James Churchward, 1852-1936
Atlantis, The Antediluvian World by Ignatius Donnelly
Understanding Mu. by Hans Stefan. Santesson
Edgar Cayce on Atlantis. by Edgar Evans Cayce
Mysteries of ancient South America by Harold Tom Wilkins, 1891-
11 more
Heaven's mirror : quest for the lost civilization by Graham Hancock
Civilization one : the world is not as you thought it was by Christopher Knight, 1950-
The lost land of Lemuria : fabulous geographies, catastrophic histories by Sumathi Ramaswamy
The Sirius Mystery: New Scientific Evidence of Alien Contact 5,000 Years Ago by Robert Temple
The new view over Atlantis by John F. Michell
The stones of Atlantis by David Zink
Worlds in Collision by Immanuel Velikovsky
When time began by Zecharia Sitchin
Atlantis in Wisconsin : new revelations about the lost sunken city by Frank Joseph
Secrets of the Great Pyramid by Tompkins, Peter(December 31, 1978) Hardcover
The Atlantis Blueprint: Unlocking the Ancient Mysteries of a Long-Lost Civilization by Colin Wilson
Fewer