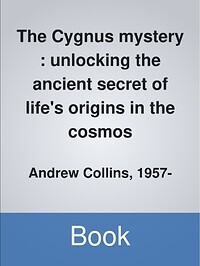 The Cygnus mystery : unlocking the ancient secret of life's origins in the cosmos

New evidence showing that the earliest origins of human culture, religion, and technology derive from the lost world of the Denisovans * Explains how Göbekli Tepe and the Giza pyramids are aligned with the constellation of Cygnus and show evidence of enhanced sound-acoustic technology * Traces the origins of Göbekli Tepe and the Giza pyramids to the Denisovans, a previously unknown human population remembered in myth as a race of giants * Shows how the ancient belief in Cygnus as the origin point for the human soul is as much as 45,000 years old and originally came from southern Siberia Built at the end of the last ice age around 9600 BCE, Göbekli Tepe in southeast Turkey was designed to align with the constellation of the celestial swan, Cygnus--a fact confirmed by the discovery at the site of a tiny bone plaque carved with the three key stars of Cygnus. Remarkably, the three main pyramids at Giza in Egypt, including the Great Pyramid, align with the same three stars. But where did this ancient veneration of Cygnus come from? Showing that Cygnus was once seen as a portal to the sky-world, Andrew Collins reveals how, at both sites, the attention toward this star group is linked with sound acoustics and the use of musical intervals "discovered" thousands of years later by the Greek mathematician Pythagoras. Collins traces these ideas as well as early advances in human technology and cosmology back to the Altai-Baikal region of Russian Siberia, where the cult of the swan flourished as much as 20,000 years ago. He shows how these concepts, including a complex numeric system based on long-term eclipse cycles, are derived from an extinct human population known as the Denisovans. Not only were they of exceptional size--the ancient giants of myth--but archaeological discoveries show that this previously unrecognized human population achieved an advanced level of culture, including the use of high-speed drilling techniques and the creation of musical instruments. The author explains how the stars of Cygnus coincided with the turning point of the heavens at the moment the Denisovan legacy was handed to the first human societies in southern Siberia 45,000 years ago, catalyzing beliefs in swan ancestry and an understanding of Cygnus as the source of cosmic creation. It also led to powerful ideas involving the Milky Way's Dark Rift, viewed as the Path of Souls and the sky-road shamans travel to reach the sky-world. He explores how their sound technology and ancient cosmologies were carried into the West, flowering first at Göbekli Tepe and then later in Egypt's Nile Valley. Collins shows how the ancient belief in Cygnus as the source of creation can also be found in many other cultures around the world, further confirming the role played by the Denisovan legacy in the genesis of human civilization.… (more)

LibraryThing member RobertBast
Disappointing. Mostly seems to tell us that lots of ancient monuments point north, which just happens to be where Cygnus was some time ago. His theory probably should have been abandoned, but perhaps he didn't want to waste all that work...
1 more
LibraryThing member CassiMerten
If you have never ventured into non-public education views on ancient history, this should not be your first. For that maybe start with Graham Hancock's Fingerprints of the Gods or Magicians of the Gods (this is a sequel to Fingerprints). If, however you are already aware of Buval's OCT and or
Show More
other questions raised by Hancock, West, Wilson, and Schoch, to name but a few, then you will find Collins' latest work of great interest.

The theories are fresh and intriguing, Collins with the help of others has done research and tested ideas to create a plausible concept of knowledge diffusion in prehistoric cultures. Make sure that you brush up on your math, astronomy and geography first!
Show Less
Fewer

Göbekli Tepe: genesis of the gods : the Temple of the Watchers and the discovery of Eden by Andrew Collins
The Sphinx mystery : the forgotten origins of the sanctuary of Anubis by Robert K. G. Temple
We Are Not the First: Riddles of Ancient Science by Andrew Tomas
Forbidden archeology : the hidden history of the human race by Michael A. Cremo
Civilization one : the world is not as you thought it was by Christopher Knight, 1950-
27 more
The Ancient Giants Who Ruled America: The Missing Skeletons and the Great Smithsonian Cover-Up by Richard J. Dewhurst
Earth under fire : humanity's survival of the Ice Age by Paul A. LaViolette
The Hiram Key: Pharaohs, Freemasons and the Discovery of the Secret Scrolls of Jesus by Christopher Knight
Uriel's Machine: Uncovering the Secrets of Stonehenge, Noah's Flood and the Dawn of Civilization by Christopher Knight
Forgotten civilization : the role of solar outbursts in our past and future by Robert M. Schoch
Beneath the pyramids : Egypt's greatest secret uncovered by Andrew Collins, 1957-
Lost star of myth and time by Walter Cruttenden
Before the Pharaohs: Egypt's Mysterious Prehistory by Edward F. Malkowski
Voyages of the Pyramid Builders: The True Origins of the Pyramids from Lost Egypt to Ancient America by Robert M. Schoch
The cycle of cosmic catastrophes : flood, fire, and famine in the history of civilization by Richard B. Firestone
The path of the Pole by Charles H. Hapgood
Signs in the Sky: Prophecies for the birth of a New Age by Adrian Gilbert
The Egypt Code by Robert Bauval
Lost secrets of the sacred ark : amazing revelations of the incredible power of gold by Laurence Gardner
Atlantis, The Antediluvian World by Ignatius Donnelly
Atlantis in the Amazon: Lost Technologies and the Secrets of the Crespi Treasure by Richard Wingate
The Velikovsky heresies : worlds in collision and ancient catastrophes revisited by Laird Scranton, 1953-
Sacred Symbols of the Dogon: The Key to Advanced Science in the Ancient Egyptian Hieroglyphs by Laird Scranton
When the gods came down : the catastrophic roots of religion revealed by Alan F. Alford, 1961-
Heaven's mirror : quest for the lost civilization by Graham Hancock
The Templars and the Ark of the Covenant : the discovery of the treasure of Solomon by Graham Phillips
Worlds in Collision by Immanuel Velikovsky
Atlantis beneath the ice : the fate of the lost continent by Rand Flem-Ath
The Mystery Of The Olmecs by David Hatcher Childress
Oedipus and Akhnaton: myth and history. by Immanuel Velikovsky, 1895-1979
Star maps : astonishing new evidence from ancient civilisations and modern scientific research of man's origins and return to the stars by William Fix, R., 1941-
The Science of the Dogon: Decoding the African Mystery Tradition by Laird Scranton
Fewer