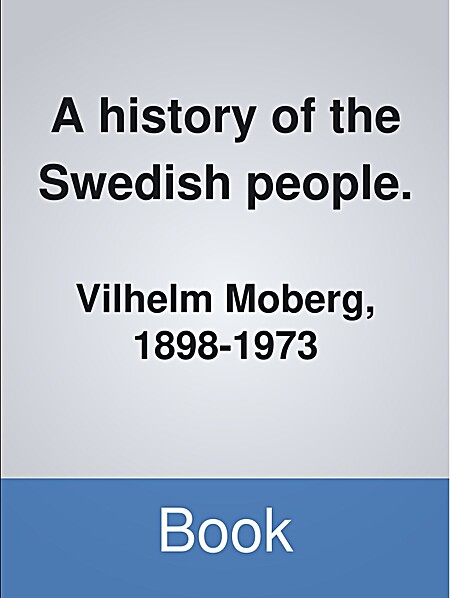 A history of the Swedish people.

Beginning in prehistoric times and culminating with the Dacke rebellion of 1542, renowned novelist Vilhelm Moberg's two-volume popular history of the Swedish people approaches its subject from the viewpoint of the common people, documenting peasants' lives as well as those of the royal families. In this first volume Moberg examines Viking raids, the coming of Christianity, and the Folkungs royal dynasty, whose tyrannical reign lasted from 1250 to the 1360s. He vividly describes the arrival of the Black Death from a ship that docked carrying only dead passengers, and he recounts the reign of Queen Margareta who founded the Kalmar Union, comprising all of Scandinavia. In every chapter, Moberg faithfully imparts how history affected "the whole people" of Sweden.… (more)

The Vikings and their origins by David M. Wilson
Medieval Scandinavia : from conversion to Reformation, circa 800-1500 by Birgit Sawyer
The Vikings by Neil Oliver
Scandinavia since 1500 by Byron J. Nordstrom
A history of the Vikings by Gwyn Jones
3 more
Kings and Vikings : Scandinavia and Europe, A.D. 700-1100 by P. H. Sawyer
A history of Sweden by Ingvar Andersson
Vikings! by Magnus Magnusson
Fewer