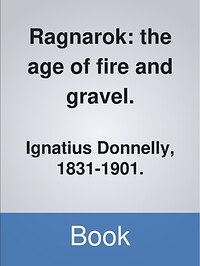 Ragnarok: the age of fire and gravel.

This book had a tremendous impact on readers in the late 1800s. Written by Ignatius Donnelly, a farmer-politician with no scientific training, it developed a strikingly original theme--that a comet passed close to or struck Earth in ancient times, causing catastrophic changes that later were vaguely recalled in mythologies and biblical tales. Throughout most of the book, Donnelly supports his ideas with convincing geological, archeological, and astronomical arguments. This reprint presents Donnelly's theory of the comet that impacted Earth tens of thousands of years ago, producing layers of gravel (which contemporary scientists attributed to glaciation) and the destruction of an advanced civilization (Atlantis), followed by a years-long cloud cover and extreme cold. A remarkable concept that has also been mentioned in ancient Arabic writings, this theory--and the book in which it is presented--will appeal to readers in many areas of interest: occult enthusiasts, fantasy buffs, and perhaps even some members of the scientific community.… (more)

Atlantis, The Antediluvian World by Ignatius Donnelly
The lost continent of Mu by James Churchward, 1852-1936
The children of Mu, by James Churchward, 1852-1936
The sacred symbols of Mu by James Churchward, 1852-1936
Worlds in Collision by Immanuel Velikovsky
14 more
Heaven's mirror : quest for the lost civilization by Graham Hancock
Lost Atlantis; new light on an old legend by John Victor Luce, 1920-
The Atlantis Blueprint: Unlocking the Ancient Mysteries of a Long-Lost Civilization by Colin Wilson
Oedipus and Akhnaton: myth and history. by Immanuel Velikovsky, 1895-1979
Fingerprints Of The Gods: The Evidence of Earth's Lost Civilization by Graham Hancock
Edgar Cayce on Atlantis. by Edgar Evans Cayce
Mysteries of ancient South America by Harold Tom Wilkins, 1891-
We Are Not the First: Riddles of Ancient Science by Andrew Tomas
Maps of the ancient sea kings; evidence of advanced civilization in the ice age. by Charles H. Hapgood
The view over Atlantis by John F. Michell
The new view over Atlantis by John F. Michell
Saga America by Barry Fell
Peoples of the sea by Immanuel Velikovsky
Atlantis in Wisconsin : new revelations about the lost sunken city by Frank Joseph
Fewer