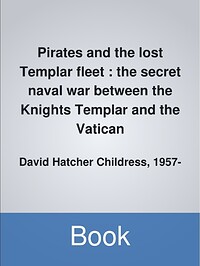 Pirates and the lost Templar fleet : the secret naval war between the Knights Templar and the Vatican

Childress takes us into the fascinating world of maverick sea captains who were Knights Templars and later Scottish Rite Free Masons who battled the Vatican and the Spanish and Italian ships that sailed for the Pope. This Lost Templar Fleet was originally based at La Rochelle in southern France but fled to the deep fjords of Scotland. This banned fleet of ships was later commanded by the St. Clair family of Rosslyn Chapel (birth place of Free Masonry). St Clair and his Templar made a voyage to Canada in the year 1298 AD, nearly 100 years before Columbus! Later, this fleet of ships and new ones to come, flew the Skull and Cross Bones, the symbol of the Knights Templar. They preyed on the ships of the Vatican coming from the rich ports of the Americas and were ultimately known as the Pirates of the Caribbean. Topics include: 10,000 Years of Seafaring: Secret Society of Navigators; King Solomonis Phoenician Navy; The Assassins, Templars & the Decapitation Strike; The Knights Templar and Their Fleet; The Rivalry Between the Knights of Malta and the Knights Templar; The Suppression of the Templars; The Lost Templar Fleet and the Origins of the Pirates; Pirates and the War… (more)

LibraryThing member jspringbrinkley
Couldn't even finish this book despite the fascinating subject. Full of spelling and typographical errors, scattered, overall just very poorly written. If the writing and publishing was so sloppy, who is to say that the research was done properly? Not only annoying to try to read, but I can't trust the content. The only reason I gave this book 2 stars instead of 1 is because I did get other book and subject ideas to read from it. Could have been a great book, sad really.… (more)

Templars in America: From the Crusades to the New World by Tim Wallace-Murphy
The Lost Treasure of the Knights Templar: Solving the Oak Island Mystery by Steven Sora
The lost colony of the Templars : Verrazano's secret mission to America by Steven Sora
The Knights Templar in the New World : how Henry Sinclair brought the Grail to Acadia by William F. Mann
The Sword and the Grail: Of the Grail and the Templars and a True Discovery of America by Andrew Sinclair
4 more
The Hiram Key: Pharaohs, Freemasons and the Discovery of the Secret Scrolls of Jesus by Christopher Knight
Rosslyn, guardian of the secrets of the Holy Grail by Tim Wallace-Murphy
The Templars and the Ark of the Covenant : the discovery of the treasure of Solomon by Graham Phillips
Uriel's Machine: Uncovering the Secrets of Stonehenge, Noah's Flood and the Dawn of Civilization by Christopher Knight
Fewer