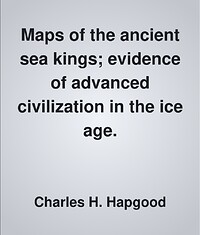 Maps of the ancient sea kings; evidence of advanced civilization in the ice age.

Charles Hapgood's classic book on ancient maps produces evidence of an advanced world-wide civilization existing many thousands of years before ancient Egypt. He has found the evidence in the Piri Reis Map that shows Antarctica, the Hadji Ahmed map, the Oronteus Finaeus and other amazing maps. Hapgood concluded that these maps were made from more ancient maps from the various ancient archives around the world, now lost. Not only were these unknown people more advanced in mapmaking than any other prior to the 18th century, it appears they mapped all the continents. The Americas were mapped thousands of years before Columbus and Antarctica was mapped once its coasts were free of ice.

LibraryThing member Redbud
A fascinating book that could use an even larger format & color photographs to make it perfect.

The lost continent of Mu by James Churchward, 1852-1936
The Atlantis Blueprint: Unlocking the Ancient Mysteries of a Long-Lost Civilization by Colin Wilson
Heaven's mirror : quest for the lost civilization by Graham Hancock
Secrets of the Lost Races: New Discoveries of Advanced Technology in Ancient Civilizations by Rene Noorbergen
The path of the Pole by Charles H. Hapgood
20 more
Fingerprints Of The Gods: The Evidence of Earth's Lost Civilization by Graham Hancock
The Giza Power Plant : Technologies of Ancient Egypt by Christopher Dunn
Forbidden archeology : the hidden history of the human race by Michael A. Cremo
The Message of the Sphinx: A Quest for the Hidden Legacy of Mankind by Graham Hancock
Technology of the Gods: The Incredible Sciences of the Ancients by David Hatcher Childress
The Sirius Mystery: New Scientific Evidence of Alien Contact 5,000 Years Ago by Robert Temple
The children of Mu, by James Churchward, 1852-1936
When time began by Zecharia Sitchin
Atlantis, The Antediluvian World by Ignatius Donnelly
Voices of the rocks : a scientist looks at catastrophes and ancient civilizations by Robert M. Schoch
Atlantis beneath the ice : the fate of the lost continent by Rand Flem-Ath
Voyages of the Pyramid Builders: The True Origins of the Pyramids from Lost Egypt to Ancient America by Robert M. Schoch
The sacred symbols of Mu by James Churchward, 1852-1936
Hamlet's Mill: An Essay Investigating the Origins of Human Knowledge And Its Transmission Through Myth
The atlas of early man by Jacquetta Hopkins Hawkes, 1910-
The Egypt Code by Robert Bauval
The Cambridge encyclopedia of archaeology by Andrew Sherratt
Civilization one : the world is not as you thought it was by Christopher Knight, 1950-
The Sign and the Seal: The Quest for the Lost Ark of the Covenant by Graham Hancock
Forgotten civilization : the role of solar outbursts in our past and future by Robert M. Schoch
Fewer