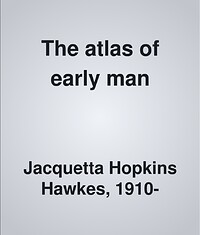 The atlas of early man

"The Atlas of Early Man "is a unique, and uniquely fascinating, work of popular natural history. For nearly two decades, it has been the definitive survey of the human developments that were the building blocks of scores of different civilizations, offering the kind of irresistible blend of history, science, and cultural study that will capture the interest and imagination of almost any reader. Now, in the first new edition since 1981, Jacquetta Hawkes's landmark volume is at last available in paperback. It is a book that fills in the gaps in our overall understanding of the ancient world: Through one thousand maps, diagrams, drawings, and illustrations, it compares the cultures of historical contemporaries, placing simultaneous developments in art, religion, technology, science, architecture, and government in graphic perspective. What was happening in China when the pyramids were being built in Egypt? What had been achieved in the Americas when wheeled vehicles first rolled across Sumeria? What point of progress had been reached in Western Europe when the Roman Empire was at its height? Hawkes's eloquent and comprehensive text brings these worlds alive for us, not just as historical entities but as living, thriving civilizations. Did the advances of man occur independently across the oceans and continents, or were they the results of a spreading influence? The provocative clarity of Hawkes's treatment enables us to draw our own conclusions to such questions-and dispels the clouds that have been so long blocked our view of early history.… (more)

World prehistory: a new outline by Grahame Clark
Atlas of ancient archaeology by Jacquetta Hopkins Hawkes
People of the earth : an introduction to world prehistory by Brian M. Fagan
The Cambridge encyclopedia of archaeology by Andrew Sherratt
Mysteries of the past by Lionel Casson
25 more
Ascent to civilization : the archaeology of early man by John Gowlett
The Lost Civilizations of the Stone Age by Richard Rudgley
Patterns in prehistory : humankind's first three million years by Robert J. Wenke
The first great civilizations; life in Mesopotamia, the Indus Valley, and Egypt by Jacquetta Hawkes
The emergence of man by John E. Pfeiffer
Dawn of the Gods by Jacquetta Hawkes
Prehistoric men. by Robert J. (Robert John) Braidwood, 1907-
The Times atlas of world history
Looking for Dilmun. by Geoffrey Bibby
The Hittites. by O. R. (Oliver Robert) Gurney, 1911-
Past worlds atlas of archaeology, HarperCollins
Lucy, the beginnings of humankind by Donald C. Johanson
America's ancient treasures; guide to archeological sites and museums. by Franklin Folsom, 1907-
Mysteries of the Mexican pyramids by Peter Tompkins
The first farmers, by Jonathan Norton Leonard, 1903-1975
The civilization of the goddess by Marija Alseikaitė Gimbutas
The Oxford Companion to Archaeology (Oxford Companions) by Brian M. Fagan
Man the tool-maker by Kenneth Page Oakley, 1911-
After the Ice: A Global Human History 20,000-5000 BC by Steven Mithen
Ancestral journeys : the peopling of Europe from the first venturers to the Vikings by Jean Manco
Babylon by Joan Oates
Invitation to Archaeology. 1967. soft cover. by james Deetz
The Penguin Atlas of Ancient History by Colin McEvedy
Cro-Magnon man, by Tom. Prideaux
Atlas of Ancient Egypt (Cultural Atlas of) by John Baines
Fewer