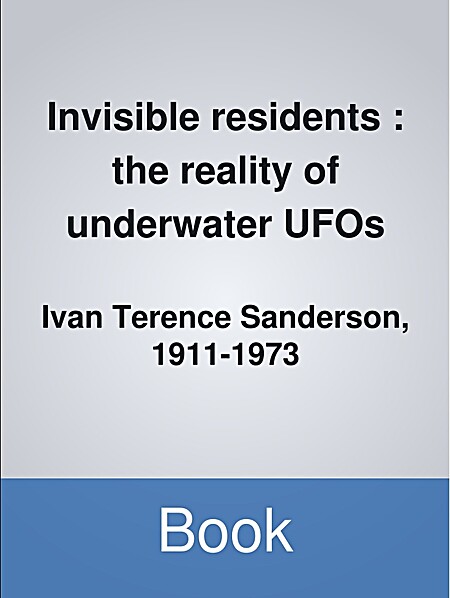 This book is a groundbreaking contribution to the study of the UFO enigma, originally published over 30 years ago. In this book, Sanderson, a renowned zoologist with a keen interest in the paranormal, puts forward the curious theory that âeoeOINTS"-Other Intelligences-live under the Earthâe(tm)s oceans. This underwater, parallel, civilization may be twice as old as Homo sapiens, he proposes, and may have âeoedeveloped what we call space flight." Sanderson postulates that the OINTS are behind many UFO sightings as well as the mysterious disappearances of aircraft and ships in the Bermuda Triangle. What better place to have an impenetrable base than deep within the oceans of the planet? Yet, if UFOs, or at least some of them, are coming from beneath our oceans or lakes, does it necessarily mean that there is another civilization besides our own that is responsible? In fact, could it be that since WWII a number of underwater UFO bases have been constructed by the very human governments of our planet? Whatever their source, Sanderson offers here an exhaustive study of USOs (Unidentified Submarine Objects) observed in nearly every part of the world. He presents many well-documented and exciting case studies of these unusual sightings; more.… (more)

LibraryThing member latefordinner
A biologist speculates about UFO's oceanic light wheels and other anomalistic phenomenon.
1 more
LibraryThing member Schmerguls
1148 Invisible Residents: A Disquisition upon Certain Matters Maritime, and the Possibility of Intelligent Life under the Waters of This Earth, by Ivan T. Sanderson (read 8 Jan 1972) This was such a stupid book I made no note about it. I only read it because it was given me to read with much urging that I read it. It is sooo dumb!… (more)
Fewer

The report on unidentified flying objects. by Edward J. Ruppelt, 1922-1960
The Mystery Of The Olmecs by David Hatcher Childress
Edgar Cayce on Atlantis. by Edgar Evans Cayce
We Are Not the First: Riddles of Ancient Science by Andrew Tomas
The Mayan Prophecies: Unlocking the Secrets of a Lost Civilization by Maurice Coterell