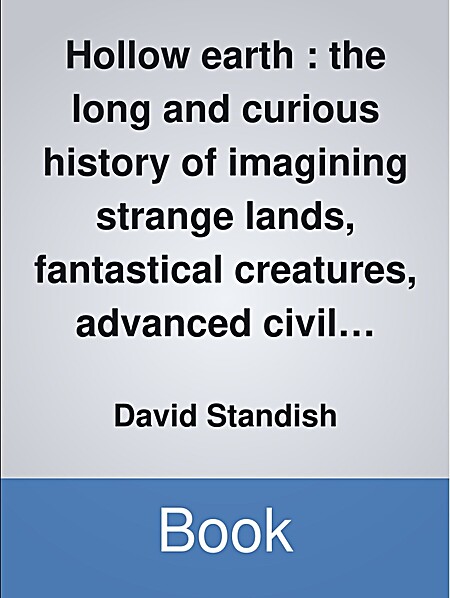 Beliefs in mysterious underworlds are as old as humanity. But the idea that the earth has a hollow interior was first proposed as a scientific theory in 1691 by Sir Edmond Halley (of comet fame), who also suggested that there might be life down there as well.Hollow Earth traces the many surprising, marvelous, and just plain weird permutations his ideas have taken over the centuries. Both Edgar Allan Poe and (more famously) Jules Verne picked up the torch in the nineteenth century, the latter with his science fiction epicA Journey to the Center of the Earth. The notion of a hollow earth even inspired a religion at the turn of the twentieth century-Koreshanity, which held not only that the earth was hollow, but also that we're all living on theinside. Utopian novels and adventures abounded at this same time, including L. Frank Baum's hollow earth addition to the Oz series and Edgar Rice Burroughs'sPellucidar books chronicling a stone-age hollow earth. In the 1940s an enterprising science-fiction magazine editor convinced people that the true origins of flying saucers lay within the hollow earth, relics of an advanced alien civilization. And there are still devout hollow earthers today, some of whom claim there is a New Age utopia lurking beneath the earth's surface, with at least one entrance near Mt. Shasta in California.Hollow Earth travels through centuries and cultures, exploring how each era's relationship to the idea of a hollow earth mirrored its hopes, fears, and values. Illustrated with everything from seventeenth-century maps to 1950s pulp art to movie posters and more,Hollow Earth is for anyone interested in the history of strange ideas that just won't go away.… (more)

LibraryThing member AndreasJ
The best bits are the early parts about Halley's attempt to account for the wandering of the magnetic poles by positing the Earth to consist of concetric shells - where he threw in the idea that the inner surfaces may be inhabitable to forestall the then inevitable objection that the inner shells would be useless and God therefore wouldn't have created them - and how the idea was taken up by fringe types like John Cleves Symmes (who thought the inner and outer worlds were connected by polar openings and therefore endlessly campaigned for polar exploration) and Cyrus Teed (a visionary who modestly named the religion he founded "Koreshanity" - Koresh being the Hebrew form of his given name - and was convinced that our world is the inside). Unfortunately, these are marred by poor editing and Standish not being as funny as he thinks he is.

The rest of the book mostly consists of summaries of novels that involve an interior world (not always on the hollow shell model). A few deservedly famous works, like Verne's A Journey to the Centre of the Earth, figure, but it's mostly ones that in Standish's own estimation are forgetable to dreadful. I ended up skipping a lot of this, Standish attempts to connect them to then-current fads and fears not being interesting enough to justify the often lengthy summaries.

There's surprisingly little on Hollow Earth in more recent crackpottery, despite repeated references to the flourishing online cottage industry of new-agers and conspiracy theorists who have adopted the idea. Perhaps the idea is that if the reader is interested they can just go out and see for themselves - a selection of links are provided.

Overall, a bit of a disappointment.… (more)
5 more
LibraryThing member heinous-eli
This book is based on an excellent and interesting premise, the persistent and not-so-long-ago idea that the earth is hollow and there is a utopia/dystopia inside that mirrors our civilization, but the prose gets bogged down with tedious details and uninteresting reflections altogether too much to merit that much of a glowing review.… (more)
LibraryThing member jorgearanda
A very nice tour through the literature claiming our planet is hollow and habitable on the inside --from those that use the premise for fictional stories to the oddly endearing crackpots that claim we're actually living *in the inside*.

Slow at times and too fast at others --in particular, the last chapter promised to be the most exciting one, but it was gone before even warming up. A nice read anyway.… (more)
LibraryThing member hadden
An interesting exploration into the world within the world. I have heard of Symmes' Hole and various other ideas, but it is nice to see them all described and collected into one book. There is also a nice accounting of movies and popular fiction that have extended the ideas in both good and bad examples.

Also, there is a good bibliography and index to assist the reader. A fun little book about a strange idea.… (more)
LibraryThing member JBD1
An overview of some of the many theories about the earth being hollow, from Edmond Halley to John Cleves Symmes through to some of the current silliness bandied about on the internet. But largely a look at the hollow earth as a theme in fiction, covering some of the very many novels which take the hollow earth as a major plot point (the vast majority of which, Standish admits, are absolutely terrible).

There are more than a few silly mistakes here, and the book is designed fairly poorly, I'm sorry to say. Those things, and the repetitive nature of the text, detract from the idea, which is a fairly interesting one.

Could have been much better than it is.… (more)
LibraryThing member JNSelko
A Crackerjack book about a crackpot idea, well researched and eminently readable.
Fewer

Atlantis, The Antediluvian World by Ignatius Donnelly
The lost continent of Mu by James Churchward, 1852-1936
Phantom islands of the Atlantic by Donald S. Johnson
Maps of the ancient sea kings; evidence of advanced civilization in the ice age. by Charles H. Hapgood
The children of Mu, by James Churchward, 1852-1936
5 more
The sacred symbols of Mu by James Churchward, 1852-1936
The Mystery Of The Olmecs by David Hatcher Childress
An encyclopedia of occultism : a compendium of information on the occult sciences, occult personalities, psychic science, magic, demonology, spiritsm, mysticism and metaphysics. by Lewis Spence, 1874-
Oedipus and Akhnaton: myth and history. by Immanuel Velikovsky, 1895-1979
Lost Atlantis; new light on an old legend by John Victor Luce, 1920-
Fewer