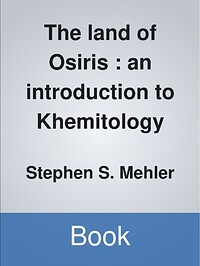 The land of Osiris : an introduction to Khemitology

Egyptologist Stephen S. Mehler has spent over 30 years researching the answers to these questions: Was there a advanced prehistoric civilisation in ancient Egypt?; Who were the people who built the great pyramids?; Who carved the Great Sphinx?; Did the pyramids serve as energy devices and not as tombs for kings? Mahler believes the answers are 'Yes!' An indigenous oral tradition still exists in Egypt, he has been able to uncover and study it with the help of a living master of this tradition, Abd'El Hakim Awyan. He has also been given permission to share these teachings -- presented heretofore in fragments by other researchers -- to the Western World, teachings that unfold a whole new understanding of ancient Egypt.

Before the Pharaohs: Egypt's Mysterious Prehistory by Edward F. Malkowski
The Giza Power Plant : Technologies of Ancient Egypt by Christopher Dunn
The Egypt Code by Robert Bauval
Lost star of myth and time by Walter Cruttenden
The Sphinx mystery : the forgotten origins of the sanctuary of Anubis by Robert K. G. Temple
18 more
The Message of the Sphinx: A Quest for the Hidden Legacy of Mankind by Graham Hancock
Lost technologies of ancient Egypt : advanced engineering in the temples of the pharaohs by Christopher Dunn, 1946-
Oedipus and Akhnaton: myth and history. by Immanuel Velikovsky, 1895-1979
The Eyes of the Sphinx by Erich von Daniken
The Science of the Dogon: Decoding the African Mystery Tradition by Laird Scranton
Forgotten civilization : the role of solar outbursts in our past and future by Robert M. Schoch
Sacred Symbols of the Dogon: The Key to Advanced Science in the Ancient Egyptian Hieroglyphs by Laird Scranton
Serpent in the sky : the high wisdom of ancient Egypt by John Anthony. West
Egypt, child of Atlantis : a radical interpretation of the origins of civilization by J. S. Gordon
The Giza prophecy : the Orion code and the secret teachings of the pyramids by Scott Creighton
The lost continent of Mu by James Churchward, 1852-1936
The sacred symbols of Mu by James Churchward, 1852-1936
Fingerprints Of The Gods: The Evidence of Earth's Lost Civilization by Graham Hancock
The Ancient Alien Question: A New Inquiry Into the Existence, Evidence, and Influence of Ancient Visitors by Philip Coppens
Voyages of the Pyramid Builders: The True Origins of the Pyramids from Lost Egypt to Ancient America by Robert M. Schoch
Signs in the Sky: Prophecies for the birth of a New Age by Adrian Gilbert
Advanced Civilizations of Prehistoric America: The Lost Kingdoms of the Adena, Hopewell, Mississippians, and Anasazi by Frank Joseph
Abydos : Egypt's first pharaohs and the cult of Osiris by David O'Connor
Fewer