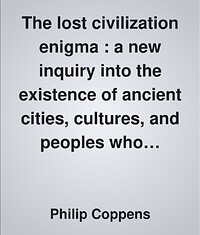 The lost civilization enigma : a new inquiry into the existence of ancient cities, cultures, and peoples who pre-date recorded history

Are history books giving us the whole story? Or is civilization far more complex and for older than we have been taught? Our school textbooks barely mention the 6,000-year-old Sumerian civilization, yet the latest archaeological findings at sites such as Jericho and, most recently, Gobekli Tepe in Turkey, have been dated to 10,000 BC. Civilization goes back at least another 10,000 years, if we are willing to believe what our ancestors themselves claimed. The Lost Civilization Enigma reveals the truth about: Lost magnitudes to known cultures, such as the Bosnian Pyramids and the civilization of "Old Europe"; The fabled lost "golden" cities of South America and the Amazon, which are slowly being rediscovered; Fascinating examples of lost technology, such as the Antikythera Device; Atlantis and the fact that it was a real civilization. Analyzing  historical and archaeological records, bestselling author Philip Coppens demonstrates that there is substantial evidence that civilization is far older, far more advanced, and far more special than is currently accepted. Clearly, our history books have left out a great deal!… (more)

LibraryThing member Paul_S
A mish-mash of archaeology (both legitimate and highly dubious), speculation and flat out non-sense. I don't think anyone can question that it's a possibility that civilisation stretches far beyond available record so you don't have to act like you're the only one brave enough to say it out loud.

People of the earth : an introduction to world prehistory by Brian M. Fagan
Forgotten civilization : the role of solar outbursts in our past and future by Robert M. Schoch
The Ancient Alien Question: A New Inquiry Into the Existence, Evidence, and Influence of Ancient Visitors by Philip Coppens
The horse, the wheel, and language : how Bronze-Age riders from the Eurasian steppes shaped the modern world by David W. Anthony
Atlantis beneath the ice : the fate of the lost continent by Rand Flem-Ath
30 more
The Message of the Sphinx: A Quest for the Hidden Legacy of Mankind by Graham Hancock
The lost colonies of ancient America : a comprehensive guide to the pre-Columbian visitors who really discovered America by Frank Joseph
After the Ice: A Global Human History 20,000-5000 BC by Steven Mithen
Fingerprints Of The Gods: The Evidence of Earth's Lost Civilization by Graham Hancock
1177 B.C. : the year civilization collapsed by Eric H. Cline
The Ancient Giants Who Ruled America: The Missing Skeletons and the Great Smithsonian Cover-Up by Richard J. Dewhurst
Maps of the ancient sea kings; evidence of advanced civilization in the ice age. by Charles H. Hapgood
Heaven's mirror : quest for the lost civilization by Graham Hancock
Before Atlantis : 20 million years of human and pre-human cultures by Frank Joseph
The Lost Civilizations of the Stone Age by Richard Rudgley
The Atlantis Blueprint: Unlocking the Ancient Mysteries of a Long-Lost Civilization by Colin Wilson
The Egypt Code by Robert Bauval
The World's Last Mysteries by Reader's Digest
Genes, giants, monsters, and men : the surviving elites of the cosmic war and their hidden agenda. by Joseph P. Farrell
Göbekli Tepe: genesis of the gods : the Temple of the Watchers and the discovery of Eden by Andrew Collins
Lost technologies of ancient Egypt : advanced engineering in the temples of the pharaohs by Christopher Dunn, 1946-
The lost empire of Atlantis : history's greatest mystery revealed by Gavin Menzies
Technology of the Gods: The Incredible Sciences of the Ancients by David Hatcher Childress
The Hiram Key: Pharaohs, Freemasons and the Discovery of the Secret Scrolls of Jesus by Christopher Knight
Uriel's Machine: Uncovering the Secrets of Stonehenge, Noah's Flood and the Dawn of Civilization by Christopher Knight
Sacred Symbols of the Dogon: The Key to Advanced Science in the Ancient Egyptian Hieroglyphs by Laird Scranton
The bog people : Iron-Age man preserved by P. V. Glob
Atlantis, The Antediluvian World by Ignatius Donnelly
Black Genesis: The Prehistoric Origins of Ancient Egypt by Robert Bauval
Voyages of the Pyramid Builders: The True Origins of the Pyramids from Lost Egypt to Ancient America by Robert M. Schoch
The Sign and the Seal: The Quest for the Lost Ark of the Covenant by Graham Hancock
Gods, graves, and scholars; the story of archaeology, by C. W. Ceram, 1915-1972.
The Cygnus mystery : unlocking the ancient secret of life's origins in the cosmos by Andrew Collins, 1957-
Advanced Civilizations of Prehistoric America: The Lost Kingdoms of the Adena, Hopewell, Mississippians, and Anasazi by Frank Joseph
The Velikovsky heresies : worlds in collision and ancient catastrophes revisited by Laird Scranton, 1953-
Fewer