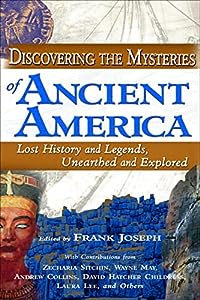 Discovering the Mysteries of Ancient America: Lost History and Legends, Unearthed and Explored

The nursery rhyme begins, "In fourteen hundred and ninety two, Columbus sailed the ocean blue." Less well-known is the line that follows: "to learn if the old maps were true." How can there be "old maps" of a land no one knew existed? Were others here before Columbus? What were their reasons for coming and what unexplained artifacts did they leave behind? The oceans were highways to America rather than barriers, and when discoverers put ashore, they were greeted by unusual inhabitants. In Discovering the Mysteries of Ancient America, the author of The Atlantis Encyclopedia turns his sextant towards this hemisphere. Here is a collection of the most controversial articles selected from seventy issues of the infamous Ancient American magazine. They range from the discovery of Roman relics in Arizona and California's Chinese treasure, to Viking rune-stones in Minnesota and Oklahoma and the mysterious religions of ancient Americans. Many questions will be raised including: - What role did extraterrestrials have in the lives of ancient civilizations? - What ancient pyramids and towers tell us about the people who built them? Are they some sort of portals to another dimension? - What prehistoric technologies have been discovered, and what can they tell us about early settlers, their religious beliefs, and possible other-worldy visitors? - Did El Dorado exist, and what of the legendary Fountain of Youth? - Was Atlantis in Cuba? - What are America's lost races and what happened to them? Discovering the Mysteries of Ancient America brings to the fore the once-hidden true past of America's earliest civilizations.… (more)

Lost cities of Atlantis, ancient Europe & the Mediterranean by David Hatcher Childress, 1957-
1421 : the year China discovered America by Gavin Menzies
The sacred network : megaliths, cathedrals, ley lines, and the power of shared consciousness by Christine Hardy
Fingerprints Of The Gods: The Evidence of Earth's Lost Civilization by Graham Hancock
1491 : new revelations of the Americas before Columbus by Charles C. Mann
19 more
Lost cities & ancient mysteries of the Southwest by David Hatcher Childress
Civilization one : the world is not as you thought it was by Christopher Knight, 1950-
The Templar meridians : the secret mapping of the New World by William F. Mann
The Atlantis Blueprint: Unlocking the Ancient Mysteries of a Long-Lost Civilization by Colin Wilson
Mysteries of ancient South America by Harold Tom Wilkins, 1891-
Black Genesis: The Prehistoric Origins of Ancient Egypt by Robert Bauval
Advanced Civilizations of Prehistoric America: The Lost Kingdoms of the Adena, Hopewell, Mississippians, and Anasazi by Frank Joseph
Ancient Egypt 39,000 BCE: The History, Technology, and Philosophy of Civilization X by Edward F. Malkowski
The lost city of Z : a tale of deadly obsession in the Amazon by David Grann
Lost technologies of ancient Egypt : advanced engineering in the temples of the pharaohs by Christopher Dunn, 1946-
The lost colony of the Templars : Verrazano's secret mission to America by Steven Sora
The Ancient Giants Who Ruled America: The Missing Skeletons and the Great Smithsonian Cover-Up by Richard J. Dewhurst
The Discoverers: A History of Man's Search to Know His World and Himself by Daniel J. Boorstin
Lost Knowledge of the Ancients: A Graham Hancock Reader by Glenn Kreisberg
Voyages of the Pyramid Builders: The True Origins of the Pyramids from Lost Egypt to Ancient America by Robert M. Schoch
Before Atlantis : 20 million years of human and pre-human cultures by Frank Joseph
A Voyage Long and Strange: On the Trail of Vikings, Conquistadors, Lost Colonists, and Other Adventurers in Early America by Tony Horwitz
A forest of kings : the untold story of the ancient Maya by Linda Schele
Hidden history : lost civilizations, secret knowledge, and ancient mysteries by Brian Haughton, 1964-
Fewer