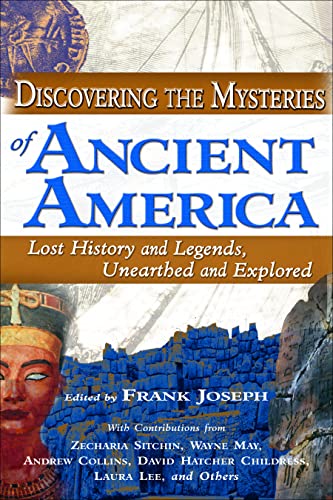 Discovering the Mysteries of Ancient America: Lost History and Legends, Unearthed and Explored

The nursery rhyme begins, "In fourteen hundred and ninety two, Columbus sailed the ocean blue." Less well-known is the line that follows: "to learn if the old maps were true." How can there be "old maps" of a land no one knew existed? Were others here before Columbus? What were their reasons for coming and what unexplained artifacts did they leave behind? The oceans were highways to America rather than barriers, and when discoverers put ashore, they were greeted by unusual inhabitants. In Discovering the Mysteries of Ancient America, the author of The Atlantis Encyclopedia turns his sextant towards this hemisphere. Here is a collection of the most controversial articles selected from seventy issues of the infamous Ancient American magazine. They range from the discovery of Roman relics in Arizona and California's Chinese treasure, to Viking rune-stones in Minnesota and Oklahoma and the mysterious religions of ancient Americans. Many questions will be raised including: - What role did extraterrestrials have in the lives of ancient civilizations? - What ancient pyramids and towers tell us about the people who built them? Are they some sort of portals to another dimension? - What prehistoric technologies have been discovered, and what can they tell us about early settlers, their religious beliefs, and possible other-worldy visitors? - Did El Dorado exist, and what of the legendary Fountain of Youth? - Was Atlantis in Cuba? - What are America's lost races and what happened to them? Discovering the Mysteries of Ancient America brings to the fore the once-hidden true past of America's earliest civilizations.… (more)

Lost cities & ancient mysteries of the Southwest by David Hatcher Childress
The Sphinx mystery : the forgotten origins of the sanctuary of Anubis by Robert K. G. Temple
Before the Pharaohs: Egypt's Mysterious Prehistory by Edward F. Malkowski
Lost cities of Atlantis, ancient Europe & the Mediterranean by David Hatcher Childress, 1957-
Advanced Civilizations of Prehistoric America: The Lost Kingdoms of the Adena, Hopewell, Mississippians, and Anasazi by Frank Joseph
21 more
Heaven's mirror : quest for the lost civilization by Graham Hancock
Atlantis in the Amazon: Lost Technologies and the Secrets of the Crespi Treasure by Richard Wingate
Mysteries of ancient South America by Harold Tom Wilkins, 1891-
Fingerprints Of The Gods: The Evidence of Earth's Lost Civilization by Graham Hancock
The Message of the Sphinx: A Quest for the Hidden Legacy of Mankind by Graham Hancock
Maps of the ancient sea kings; evidence of advanced civilization in the ice age. by Charles H. Hapgood
The Atlantis Blueprint: Unlocking the Ancient Mysteries of a Long-Lost Civilization by Colin Wilson
Ancient Egypt 39,000 BCE : the history, technology, and philosophy of Civilization X by Edward F. Malkowski
Civilization one : the world is not as you thought it was by Christopher Knight, 1950-
Lost secrets of the sacred ark : amazing revelations of the incredible power of gold by Laurence Gardner
Pale ink; two ancient records of Chinese exploration in America. by Henriette Mertz
Beneath the pyramids : Egypt's greatest secret uncovered by Andrew Collins, 1957-
Lost technologies of ancient Egypt : advanced engineering in the temples of the pharaohs by Christopher Dunn, 1946-
Ancient mysteries of Britain by Janet Bord
The Cygnus mystery : unlocking the ancient secret of life's origins in the cosmos by Andrew Collins, 1957-
The first American : the suppressed story of the people who discovered the New World by Christopher Hardaker
The lost continent of Mu by James Churchward, 1852-1936
The sacred symbols of Mu by James Churchward, 1852-1936
Architects of the underworld : unriddling Atlantis, anomalies of Mars, and the mystery of the Sphinx by Bruce Rux, 1958-
When time began by Zecharia Sitchin
The stone puzzle of Rosslyn Chapel : the truth behind its Templar and Masonic secrets by Filip Coppens
Fewer