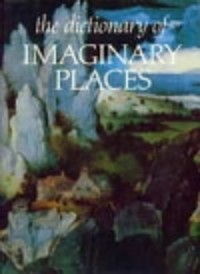 The Dictionary of Imaginary Places

"From Atlantis to Xanadu, this Baedeker of make-believe takes readers on a tour of more than 1,200 realms invented by storytellers from Homer's day to our own." "Most every fanciful world from books and film is included: Shangri-La and El Dorado are here, as is Utopia, Tolkien's Middle-earth, and Carroll's Wonderland, as well as the Beatles' Pepperland, the Marx Brothers' Freedonia, and a strange little town called Stepford. The history and behavior of the inhabitants of these lands are described in detail and supplemented by more than 220 maps and illustrations that depict the lay of the land in a host of elsewheres." "Now brought up-to-date with dozens of new entries for such places as Jurassic Park, Salman Rushdie's Sea of Stories, and Neil Gaiman's Neverwhere, this volume is even more comprehensive and entertaining."--BOOK JACKET.… (more)

LibraryThing member Branduno
I first got the 1987 edition of this book as a gift from my uncle in the mid-nineties, and it has since been one of my favorite volumes to idly peruse. Though it contains lengthy entries on the most frequently visited of imaginary places, such as Middle-earth, Earthsea, and Oz, its entries on less
Show More
familiar regions such as Sylvia Townsend Warner's Kingdoms of Elfin are welcome.

This work was my first introduction to such places as Arkham, Gormenghast, and Erewhon, and inspired me to find each source work. I've found it both a useful reference as well as fine pleasure reading due to Manguel and Guadalupi's jovial prose, which treats each place as if the reader might really be planning to travel there in the near future.
Show Less
7 more
LibraryThing member ed.pendragon
A seminal book for me in that it (a) took places described in a range of literary works as seriously real by giving each a Baedecker-style travel guide entry, and (b) provided maps and charts giving visual aids to familiar and unfamiliar locations. There have been revised editions since 1980, which
Show More
I've seen but not examined, but this was the first attempt to give an overview of dystopias, utopias, fantasy worlds and comic geographies from different cultures, languages and centuries. The mock-seriousness is sometimes leavened with equally tongue-in-cheek humour but at times the terseness of some entries can be wearing. Some maps need/ed revision (Narnia, for example, has/had some crucial omissions and misplacements), but their consistent olde-worlde look (with hachures rather than contour lines, for instance, and Renaissance-style type faces) is charming and lends character to the whole presentation. A treasure chest to dip into if you haven't already come across it.
Show Less
LibraryThing member Ameliaiif
This book is absolutely amazing, it is insightful, and it is a must-have for anyone attempting to write fantasy. included are: - mythical places like Valhalla and Hades - classical locations like Thomas More's Utopia, the places in Jonathan Swift's Gulliver's Travels... - EVERYWHERE in the Middle
Show More
Earth universe! (that alone deserves 5 stars) - and recent locations, like J.K. Rowling's Hogwarts!!! Ohhh and the pictures are wonderful, too!
Show Less
LibraryThing member GarryRogers
The armchair explorer's guide to the geography of imaginative literature. I thought I knew some of the places well, but I learned more when I saw them through the authors' eyes. This book is a source of ideas, but it's mainly just fun.
LibraryThing member soniaandree
This book is a library essential - it can be browsed each time there's a need to refresh a fictional setting, in fiction, science-fiction and fantasy. This newly revised edition includes Hogwarts, and it is a most useful tool when refering to imaginary places.
LibraryThing member JBD1
Fun, but the criteria for inclusion or non-inclusion didn't entirely make sense, so I kept thinking of places that seemed like they should have been in and weren't, or the reverse. But still a fascinating book to browse through for inspiration, anyway.
LibraryThing member Zmrzlina
Just a book to pick up, open to any page, and get lost in an imaginary landscape. I adore setting.
LibraryThing member Czrbr
Book Description: San Diego, CA, U.S.A.: Harcourt Trade Publishers, 1987. Soft Cover. Fine/No Dust jacket as Issued. First Edition. 4to - over 9ľ" - 12" tall. Fifth Printing; 454 pps
Fewer

Phantom islands of the Atlantic by Donald S. Johnson