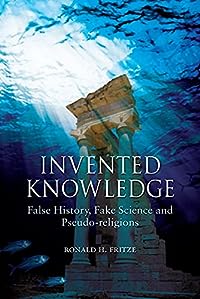 Were the Chinese the first to discover America in 1421? Did Jesus and Mary Magdalene have children together? Did extraterrestrials visit the earth during prehistory and teach humans how to build pyramids and stone structures? These are only a few of the controversial and intriguing questions that Ronald H. Fritze investigates in Invented Knowledge.             This incredible exploration of the murky world of pseudo-history reveals the proven fact, the informed speculation, and the pure fiction behind lost continents, ancient super-civilizations, and conspiratorial cover-ups—as well as the revisionist historical foundations behind religions such as the Nation of Islam and the Church of Jesus Christ of the Latter-day Saints. Drawing on the best scholarship available, Fritze shows that in spite of strong, mainstream historical evidence to the contrary, many of these ideas have proved durable and gained widespread acceptance. As the examples in Invented Knowledge reveal, pseudo-historians capitalize on and exploit anomalies in evidence to support their claims, rather than examining the preponderance of research as a whole.             From Indiana Jones and the Kingdom of the Crystal Skull to 10,000 B.C., the sensationalist topics of pseudo-history captivate audiences and permeate popular culture. Invented Knowledge offers many entertaining and enthralling examples of spurious narratives, artificial chronologies, and ersatz theories in a book guaranteed to intrigue, open eyes, and spark conversation among readers—skeptics and believers alike.… (more)

LibraryThing member ed.pendragon
Are there more things in / our philosophies than in / heaven or earth, Hor...?

I read a first-hand account by a reputable historian who was appalled by a comment he heard after watching the film of The Da Vinci Code: "It makes you think, doesn't it?" He wanted to scream, that such banale make-believe based on allegations of 'hidden' history concocted by conspiracy theorists should be given any credence or even entertained. The many case-histories presented in Invented Knowledge may well induce similar paroxysms in rationalists, and could warrant a health warning on the cover.

This is a study of examples of pseudohistory or 'false' history that have emerged or re-emerged in recent years, told particularly from a North American viewpoint (the author is Professor of History at Athens State University in Alabama). In seven chapters (plus an introduction) it covers the development of the Atlantis myth, invented narratives of the peopling of the American continent, contrasting racist cosmogonies evolved from 'white' and 'black' perspectives, catastrophe scenarios and maverick academic theories as illustrated by the Black Athena controversy. Fritze covers a lot of ground and raises a number of issues, all backed up by plentiful references and a select bibliography. The text is easy to read (despite a handful of typos) and makes its several points cumulatively though occasionally with some repetition.

The chosen topics in Invented Knowledge deal substantively with answers to the questions Who? What? When? Where?, and that is fascinating enough; but I equally would have liked more on answers addressing How? and Why?. To be sure, Fritze does treat with these at times: for example, he quotes L Sprague de Camp on why the concept of Atlantis might provide "mystery and romance for those who don't find ordinary history exciting enough", and his analysis of the eager reception of the invented histories for followers of Christian Identity, the Nation of Islam and Afrocentrism touches on the social, economic, cultural and personal imperatives that drove individuals and groups to espouse invented narratives that gave a sense of identity and purpose to their lives.

However, the thrust of what he outlines comes across as an easy dig at ignorance and irrationality, and the lack of a final chapter on conclusions means the reader is left in a kind of limbo. Favourable reviews quoted on the back cover provide value-judgements on the beliefs that Fritze parades: folly ... crackpot ... claptrap ... nonsense. More useful would have been suggestions as to how to effectively counter sincerely-held and often dangerous beliefs rather than merely holding them up to ridicule. And I also wonder why he stopped short of pointing out the fallacies inherent in more established religions, as some of these are as worthy of critical comment as beliefs in aliens in UFOs impregnating humans, advanced technologies in ancient civilisations and comets turning into planets.… (more)

Frauds, myths, and mysteries : science and pseudoscience in archaeology by Kenneth L. Feder
Fantastic archaeology : the wild side of North American prehistory by Stephen Williams, 1926-
Holy Blood, Holy Grail: The Secret History of Christ & The Shocking Legacy of the Grail by Michael Baigent
Abominable science! : origins of the Yeti, Nessie, and other famous cryptids by Daniel Loxton
The Sign and the Seal: The Quest for the Lost Ark of the Covenant by Graham Hancock
4 more
Fingerprints Of The Gods: The Evidence of Earth's Lost Civilization by Graham Hancock
North Pole, South Pole : the epic quest to understand earth's magnetism by Gillian M. Turner
The Last Imaginary Place: A Human History of the Arctic World by Robert McGhee
Maps of the ancient sea kings; evidence of advanced civilization in the ice age. by Charles H. Hapgood
Fewer