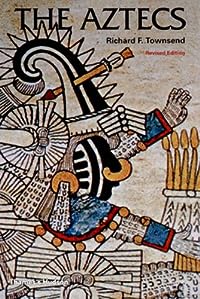 Today the Aztecs seem a remote, alien people. Warlike and bloodthirsty, they are best known as the practitioners of human sacrifice. Yet their creative achievements are impressive: within the space of a hundred years they established the largest empire in Mesoamerican history, and at Tenochtitlan built a vast, shimmering city in a lake, a Venice of the New World whose temple-pyramids, elegant plazas and thronging markets defied the descriptive powers of the conquistadors. Richard Townsend presents the first fully rounded portrait of the Aztecs, integrating military, economic and symbolic approaches to reconcile the apparently contradictory aspects of their culture. He begins with a dramatic narrative of the Spanish conquest and then charts the rise of the Aztecs from humble nomads to empire builders. He shows how war and human sacrifice did indeed act as instruments of terror, but also how their deeper significance lay in the Aztec belief that the shedding of human blood ensured fertility of the land and renewal of the seasons. Chapters on the ancient deities and festival calendar, the New Fire ceremony and sacred rain-mountains, as well as kingship rites, explore this all-pervading theme in Aztec society of physical and spiritual regeneration. The Aztecs ranges from the everyday life of farmers and priests, artisans and kings, to the sinister spying activities of Aztec traders; from the making of chocolate to battle tactics. Recent discoveries from archaeological excavations are interwoven with the latest results from studies of the monuments, Spanish records and illustrated codices to produce a fresh and definitive new history of a remarkable people.… (more)

LibraryThing member rajaratnam
Not new information, but well presented. Shows the power of Destiny. The conqueror, in his home base, is today one of the nations on the brink of financial disaster. More evidence of dastardly Destiny?

The Maya by Michael D. Coe
Mexico by Michael D. Coe
A forest of kings : the untold story of the ancient Maya by Linda Schele
The Aztecs by Michael Ernest Smith
The great temple of the Aztecs : treasures of Tenochtitlan by Eduardo Matos Moctezuma
23 more
La vie quotidienne des Azteques a la veille de la conquete espagnole. by Jacques Soustelle, 1912-
The code of kings : the language of seven sacred Maya temples and tombs by Linda Schele
Breaking the Maya code by Michael D. Coe
Chronicle of the Maya kings and queens : deciphering the dynasties of the ancient Maya by Simon Martin
The art of Mesoamerica : from Olmec to Aztec by Mary Ellen Miller
Aztecs of Mexico : origin, rise, and fall of the Aztec nation by George Clapp Vaillant
The Incas by Terence N. D'Altroy
Maya cosmos : three thousand years on the shaman's path by David A. Freidel
The Incas and their ancestors : the archaeology of Peru by Michael Edward Moseley
The lost chronicles of the Maya kings by David Drew
Kingdoms of gold, kingdoms of jade : the Americas before Columbus by Brian M. Fagan
Rise and fall of the Maya Civilzation by J. E. Thompson
The blood of kings : dynasty and ritual in Maya art by Linda Schele
The Toltecs, until the fall of Tula by Nigel Davies
The broken spears : the Aztec account of the Conquest of Mexico by Miguel León Portilla
The ancient Maya. by Sylvanus Griswold Morley, 1883-1948.
Scribes, warriors, and kings : the city of Copán and the ancient Maya by William Leonard Fash
Prehistoric Mesoamerica by Richard E. W. Adams
Art of the Andes: From Chavín to Inca (World of Art) by Rebecca R. Stone
The ancient sun kingdoms of the Americas: Aztec, Maya, Inca. by Victor Wolfgang Von Hagen, 1908-
Popol vuh : the definitive edition of the Mayan book of the dawn of life and the glories of gods and kings by Dennis Tedlock
The olmec world by Ignacio Bernal
The mighty Aztecs by Gene S. Stuart
Fewer