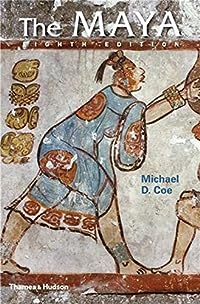 The Maya has long been established as the best, most readable introduction to the New World's greatest ancient civilization. In its pages Professor Coe distills a lifetime's scholarship for the general reader and student, presenting the latest findings, most exciting scholarship and freshest perspectives on Maya culture. Since the publication of the previous edition, new sites have been uncovered and further excavations in old sites have proceeded at an unprecedented pace. New epigraphic, archaeological and osteological research has thrown light on the identity of the "founding fathers'' of such great sites as Tikal and Copan, and their close affiliation with Teotihuacan. The previously little-known centre of Ek' Bahlam in northeastern Yucatan has emerged as a regional kingdom of major importance, with extraordinary stucco reliefs and a plethora of painted inscriptions. This seventh edition also presents new evidence for the use of wetlands by the Classic Maya, and fresh perspectives on the catastrophic demise of Classic civilization by the close of the ninth century. A new edition of an accessible introduction to the ancient New World civilization incorporates the latest archaeological findings, including the discoveries of San Bartolo murals, new information about the founders of the Tikal and Copan communities, and the regional significance of the Ek' Balam kingdom.… (more)

LibraryThing member AlCracka
Extremely dense - think of this as a textbook - but apparently the most comprehensive collection of information about the Maya. I was influenced by Jared Diamond, who in the "Further Reading" section of his excellent "Collapse" says so in no uncertain terms.

Fun trivia: you know that 2012 bs? It's this guy's fault. In an earlier edition of this book, he idly pointed out that the Mayan calendar is cyclical and a cycle ends in 2012; conspiracy theorists took it from there. In this edition he comments on it, with a combination of shame and amusement.… (more)
6 more
LibraryThing member aethercowboy
If you're like me, you have a fascination with mesoamerican civilizations. Well, my fascination lies more in their mythology, but just the same, the civilization behind the mythology is just as interesting.

Michael Coe gives a historical overview of this once great civilization, explaining their culture in an illuminating way. Both barbaric and beautiful, the Aztecs left their influence on North America before being all but destroyed by the Spanish.

This book is highly recommended to anyone who is interested in precolumbian civilizations, or even just mesoamerican civilizations.… (more)
LibraryThing member kurvanas
Coe's work still remain some of the best in the field. Enjoyable and fascinating, they bring history alive and let ancient civilization flourish once more. All archaeological/historical authors should take note.
LibraryThing member thcson
I think this book concentrates too much on the archaeological evidence. Of course that's where you must start when interpreting the history of the Maya, but the general reader would probably be more interested in conclusions than the archaeological background.
LibraryThing member AprilBrown
What ages would I recommend it too? – Twelve and up.

Does the story leave questions in the readers mind? – Yes - What was daily life like for the Maya?

Any issues the author (or a more recent publisher) should cover? No.

Short storyline: A lot of discussion around the Maya.

Notes for the reader: The first 50 pages are useful. There are a lot of pictures, though few maps to figure out the places and times they are talking about about. After the first 50 pages, when they get to an interesting point, they mention it will be covered in chapter nine. I'm not so sure it was. Chapter ten totally confused me. I think the layout could be improved with a few headings that clarify what they are discussing in many places. It's confusing. As if they lumped it all together, and leave it up to the reader to figure out when one time period, or place ends and another begins. The pictures keep it from being a 2.… (more)
LibraryThing member Michael.Bradham
Maps, pictures of temples, artifacts, calendars. Findings of similarities of Maya to Aztec and Asian culture. Mayan everyday life, religion, and culture described. Interesting to read about how calendar linked to astronomical events. Detailed insight of language with pictures.
LibraryThing member LASC
A brief and up-to-date survey of what is known about the Maya civilization. An anthropologist follows them from their probable origins don to the arrival of the more warlike Toltecs and the hybrid splendours of Chicken Itza.
Fewer

A forest of kings : the untold story of the ancient Maya by Linda Schele
The code of kings : the language of seven sacred Maya temples and tombs by Linda Schele
Chronicle of the Maya kings and queens : deciphering the dynasties of the ancient Maya by Simon Martin
Mexico by Michael D. Coe
The ancient Maya. by Sylvanus Griswold Morley, 1883-1948.
21 more
Breaking the Maya code by Michael D. Coe
The world of the ancient Maya by John S. Henderson
Cities of the Maya in seven epochs, 1250 B.C. to A.D. 1903 by Steve Glassman
Maya, the riddle and rediscovery of a lost civilization by Charles Gallenkamp
Maya cosmos : three thousand years on the shaman's path by David A. Freidel
The Aztecs by Richard F. Townsend
The Maya world by Elizabeth P. Benson
An album of Maya architecture by Tatiana Proskouriakoff
The blood of kings : dynasty and ritual in Maya art by Linda Schele
Popol vuh : the definitive edition of the Mayan book of the dawn of life and the glories of gods and kings by Dennis Tedlock
Lost kingdoms of the Maya by Gene S. Stuart
Lost cities of the Maya by Claude F. Baudez
Rise and fall of the Maya Civilzation by J. E. Thompson
The lost chronicles of the Maya kings by David Drew
Yucatan before and after the conquest by Diego de Landa
The mysterious Maya by George E. Stuart
The art of Mesoamerica : from Olmec to Aztec by Mary Ellen Miller
Prehistoric Mesoamerica by Richard E. W. Adams
Scribes, warriors, and kings : the city of Copán and the ancient Maya by William Leonard Fash
Ancient peoples of the American Southwest by Stephen Plog
The great temple of the Aztecs : treasures of Tenochtitlan by Eduardo Matos Moctezuma
Fewer